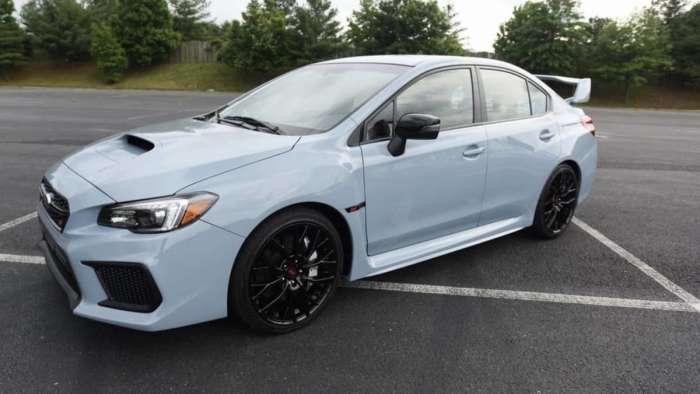 Next-Gen Subaru WRX STI Preview; Is The STI Getting Ready To Explode?

Subaru Corp will give the WRX STI a complete redesign. Is the STI getting ready to explode in sales?
Advertisement

The WRX/STI needs a redesign and new upgrades to the aging EJ25 2.5-liter turbo Boxer and big changes are likely coming. The WRX/STI finished 2018 strong which tells us demand for the sport-tuned WRX and performance-tuned STI are still strong. Subaru and Subaru Tecnica International have made a commitment to keep the performance line and this will benefit performance fans. Performance enthusiasts want new exterior styling, a new power plant, and a hatchback body style. It’s been 5 years since the last remodel, and even before a redesign sales are still brisk.

The Subaru WRX and WRX STI are still the best performance value on the planet. The 2019 Subaru WRX/STI finished 2018 with strong sales. Subaru of America reports 2,417 units sold in December to finish out the year with a total of 28,730 models sold for 2018. It’s a small downturn of -8.4 percent compared with 2017, but all Subaru nameplates were down except for Crosstrek. But the STI could be poised for an explosion in sales when the new model arrives.

Here’s what could be coming

Subaru Corporation’s design chief Mamoru Ishii said after the VIZIV Performance Concept’s reveal at the Tokyo Motor Show in October, fan feedback was very positive, and the new-generation Subaru WRX and WRX STI could have similar lines. Subaru’s production cars rarely look anything like their concepts, so we will wait for that to happen. Remember the WRX Concept?

Ishii told AutoCar, “We have built up this tradition with the Legacy, Impreza, and WRX,” he said. “We want it to look fast even when it is parked.” But there could be even bigger changes coming under the hood scoop of the new-generation Subaru WRX/STI. Subaru won’t ever change it from all-wheel-drive, but what powers the new performance car could be radically different.

Ishii went on to say, “Four-wheel drive is critical to the power and performance levels our customers expect, but on the engine, we have more freedom.” The engine Subaru’s design chief is talking ab, ut could offer up hybrid, plug-in hybrid and all-electric power to those four wheels in the next-generation model.

There are rumors the WRX STI will get a new FA24 2.4-liter turbo under the hood. According to a report from Road & Track, Subaru could use the new Ascent 2.4-liter turbo Boxer in the fourth-generation Subaru WRX STI replacing the aging EJ25 2.5-liter used in the current model when it arrives sometime in 2020. It’s reported the 2.4-liter turbo could make 330 plus horsepower in the new STI.

Subaru engineers developed the 2.4-liter powerplant for the Ascent 3-Row family hauler. The new FA24 Boxer engine comes with the latest direct injection and other internal upgrades for the best power and towing vs fuel efficiency. Could Subaru drop it in the fourth-generation WRX STI?

Other rumors say Subaru and Subaru Tecnica International are bringing out a new limited edition Subaru WRX STI TC380. Drive.com reports Subaru leaked an image of a new exclusive limited run TC380 WRX STI badge, and this model will only be sold in Japan. But if the information is correct, and we’ve been unable to confirm any of this, the TC380 could produce 380 horsepower. The report says the TC380’s frame rigidity was increase to handle the extra horsepower.

Whether the WRX/STI gets a hatchback model is anyone’s guess, but fans want the return of the 5-Door STI. Subaru is expected to launch the completely redesigned fourth-generation WRX STI sometime in 2020-2021 and big changes are coming. Stay tuned.

SoDoneHere wrote on January 7, 2019 - 6:26pm Permalink
I've been waiting for Subaru to replace the ej25 for a decade. Let this sink in for a minute, Bill Clinton was president when the ej25 was new. It was a great engine 16 years ago. Now it's just a sad reminder that Subaru used to care. These articles have been floating around about what Subaru is going to do with a new engine and the new WRX for years. I won't hold my breath waiting fir Subaru will impress me. Oh, and "best performance value on the planet"? I think the Type R might have a differing opinion.
uuhhh wrote on January 15, 2019 - 4:49pm Permalink
more expensive and FWD? No thanks.
delusional wrote on January 7, 2019 - 9:58pm Permalink
My dream is for Subaru to develop a 3.0 liter flat-six biturbo for the next WRX STI so we can get that 450+ BHP from the factory
Tommy wrote on June 16, 2019 - 2:27pm Permalink
But it won't be cheap.
JP wrote on January 28, 2019 - 6:09pm Permalink
Kudos on Subaru's comments on the engine and it's other possibility, but for the record I prefer the sedan over the hatchback. just sayin', not all hatchback lovers out there.
Nateg20 wrote on February 11, 2019 - 3:04pm Permalink
"The Subaru WRX and WRX STI are still the best performance value on the planet.". This may have been a worthy debate back when it first came to America. But the landscape has drastically changed. Plenty of base model sporty cars offer more horsepower than a fully decked out STi for much less money than a WRX. MT Lighting lap results have repeatedly showed where the WRX/STi's place in the performance world is. WRX/STi are the are clear leaders for hit count when searching for "ringland failure" though. All piston engines have components these right? Combine that with dismal JD Power results. How do these vehicles have any resale value? Subaru has light years to go before they can be considered the best performance value on this planet.
Brandon wrote on February 15, 2019 - 1:14pm Permalink
What sporty car has more horsepower for much less money than a WRX? I don't know of a single one. The only real competition is the Ford Focus RS, (which Ford is killing off for a few years, which also had engine problems of it's own), and the Civic Type R, which isn't AWD and you cannot buy without a significant dealer markup on it. The MT Lighning lap has the STI at #163, and almost every car above it either costs a lot more, or is a 2 door. The one exception is the Focus RS. You must be a big Evo guy.
Yeahok wrote on March 18, 2019 - 7:24pm Permalink
He's definitely a chevy or Jeep guy. Jd power awards are paid for genius.
Brian wrote on March 19, 2019 - 11:01pm Permalink
Type R don’t have any dealer markup anymore. Not since the first launch, which I’m sure all those kids who ran out and paid an extra $15-25,000 for one and still have years to pay off are kicking themselves now. Stuck with the car and all the debt. Hey, maybe they can all post YouTube videos and make some extra money to pay them off faster.