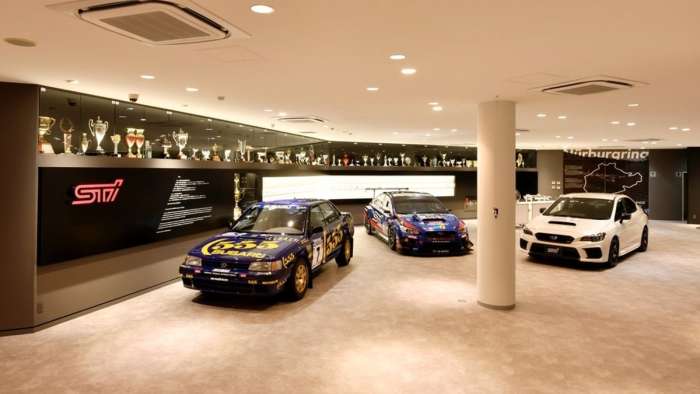 30 Years Of STI; Will The Rumble Continue?

Subaru and Subaru Tecnica International are celebrating their 30-year anniversary together. Will the rumble continue?
Advertisement

Subaru is known for their sporty performance because of what Subaru Tecnica International infused the small Japanese automaker with, in 1988. Ever since Subaru has produced the Impreza WRX and WRX STI performance cars that created a cult-like following. Performance fans want the brand to keep its rally heritage and continue to infuse the brand with new STI-enhanced models.

Subaru Corp may be listening and renewed their commitment by upgrading the STI gallery in Mitaka, Tokyo and will open on January 6, 2019. Right, what does a newly-upgraded STI gallery have to do with keeping the brand sporty and building better performance cars? Subaru and STI say they are going to keep the communication open between the Japanese automaker and their performance fans.

We can only hope Subaru Corp will keep their promise to their fans to produce more and improved performance vehicles. Subaru announced at the New York International Auto Show in 2015, they would bring more Subaru Tecnica International (STI) enhanced models to the US.

Here’s what performance fans have received from Subaru so far. They’ve seen the BRZ tS (without any engine upgrades), and the WRX STI Type RA (With +5hp). Subaru announced they will launch a new WRX STI S209 in the U.S. that will be revealed at the NAIAS in Detroit. Details of the new STI S209 will be announced on November 14. It will likely be a limited edition model with only around 500 examples produced. Subaru is trying to keep WRX STI fans interested before the performance model gets a redesign in 2020-2021. It’s what is under the hood scoop of the S209 that will keep fans interested.

Performance enthusiasts want a new Subaru BRZ STI that has improved performance. A turbocharged engine would be a perfect upgrade to go along with the STI suspension upgrades on the BRZ tS limited edition model. But it’s unlikely Subaru will bring out a turbo BRZ STI. Subaru says it will add too much weight and the price would be too high on the rear-drive sports coupe. Subaru of America's Car Line Planning Manager, Todd Hill says, "We want to keep it affordable. It’s priced for enthusiasts.” Subaru doesn’t need to give the entire BRZ lineup a turbo engine. Just like the sport-tuned WRX has the performance-tuned WRX STI, BRZ needs a performance-oriented BRZ STI. The problem Subaru has is, they also need Toyota to sign off on the project.

Bring back the Forester 2.0XT

Fans were disappointed when Subaru dropped the Forester 2.0XT from the lineup. Subaru axed the sporty 2.0XT trim with the all-new fifth-generation 2019 Forester redesign. Subaru Corp likely made the decision to kill the sporty 2.0-liter turbocharged model because of slow sales, and more importantly fuel mileage. Subaru needs to figure out how to improve mileage and bring the performance Forester back. Maybe the new Forester STI e-Boxer Hybrid Concept being unveiled at the Tokyo Auto Salon is the answer?

Ever since the Crosstrek launched in 2012, performance fans have been asking for a Crosstrek STI turbocharged model. Subaru did bring a new Crosstrek STI demo model for the Japan market. The Japan XV came with an STI performance package, a variety of STI performance parts like a large rear spoiler, a special STI exhaust with Sport dual mufflers, tower bar and draw stiffener that improved handling in the small crossover.

But fans want the suspension and exterior upgrades along with an FA20 2.0-liter DIT turbo engine that comes in the WRX under the hood. Subaru would need to lower the ride height so maybe a better option would be a turbocharged Impreza hot hatch. Subaru Corp brings a new Impreza STI hatch to the Tokyo Auto Salon 2019. Stay tuned.

Subaru and STI say they “will provide "peace of mind and pleasure" in future car creation and motorsports, and will respond to the trust and expectations of all the fans around the world.” Subaru performance fans have high expectations. Can Subaru and STI deliver more rumble?

Kevin Hawley wrote on January 15, 2019 - 12:32pm Permalink
They need to add a better oil pump and improve on oil consumption. Read a lot about class action lawsuits because of this issue, monitored my 2013 WRX STI very closely after learning of this and still ended up rebuilding the engine. Just after warranty...go figure.

LG's New EV Battery Plant Is a Welcome News for Tesla
Tesla Giga Berlin's New Hurdle: It's Not Only the Gov't, but Now Tesla Itself
END_OF_DOCUMENT_TOKEN_TO_BE_REPLACED