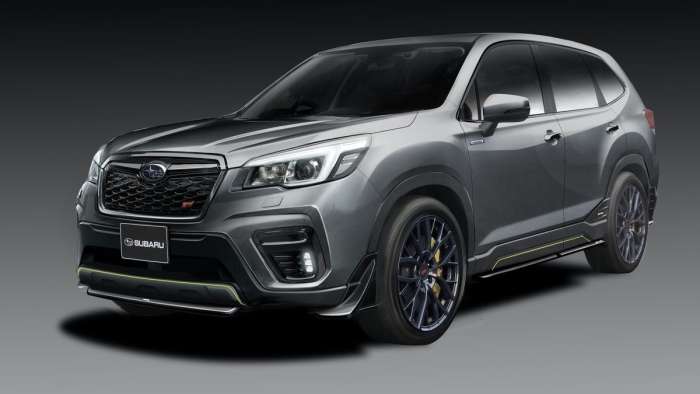 Subaru moves into new territory with Subaru Tecnica International (STI). The Japanese automaker needs to produce more hybrid vehicles, and they also need to keep their performance fans happy. They can accomplish both in the new first-ever Forester STI e-Boxer Hybrid Concept.

Subaru is getting ready to uncover the first-ever Forester e-Boxer hybrid that has been enhanced by their performance partner, STI. It’s coming to the Tokyo Auto Salon 2019 running January 11-13. This show is where Subaru Corp typically unveils their concept performance models to show the world. Last year, they brought the VIZIV Performance STI Concept, a forerunner of the fifth-generation 2020-2021 Subaru WRX STI to the show for performance fans.

This year the Japanese automaker brings two STI-enhanced performance models; a 2019 Subaru Forester STI e-Boxer hybrid and an Impreza STI concept model to the Tokyo Auto Salon. We don’t have many details on the new performance Forester STI other than Subaru Tecnica International, Subaru’s performance partner, has given the hybrid powertrain some upgrades.

The new fifth-generation 2019 Forester 2.5-liter gas engine produces 182 hp and 176 lb-ft of torque, so the Forester e-Boxer hybrid already has more torque and power output. With STI getting their hands on the new Forester, it could offer additional power upgrades for improved performance. 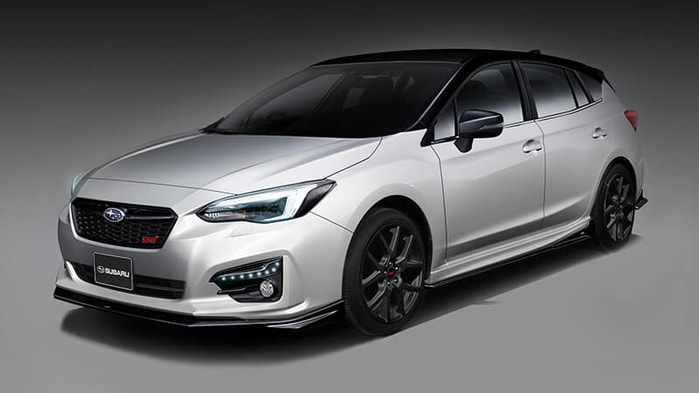 Subaru Corp also brings a new Impreza STI Concept hot hatch to the Tokyo show. It’s based on the 2.0iS EyeSight model and gets exclusive interior and exterior parts. The interior comes with a Bordeaux interior. Subaru did not reveal any STI engine upgrades to the FB20 2.0-liter Boxer engine that powers the Impreza compact.

Ed B wrote on December 26, 2018 - 4:56pm Permalink
My question is: Will they ever see the light of day in terms of real production? Subaru is great at concepts but not so good bringing them to reality and actual showrooms. Many competitors are rushing the fill the void of the XT, namely Mazda with the 2019 CX-5. Get back in the performance game Subaru, the enthusiasts aren't overly concerned about gas mileage, we should have an option...
Digital Doc wrote on December 26, 2018 - 5:36pm Permalink
Looks like a decent appearance package, and thank goodness they ditched the ridiculous orange racing stripe on the Forester Sport that looks way too Hotwheels. However, these engine numbers are quite sedate, and uninspired. Not sure why Subaru is not willing to show the Forester nor the Crosstrek some love in the engine department. Some of us want a performance SUV, and Subaru really offers us nothing at this point. I continue to believe they are totally missing a performance niche, but as long as their sales keep going up, we are easy to ignore and forget about.
Bob wrote on January 1, 2019 - 10:04pm Permalink
The e-boxer is on sale in Japan, but based on its official fuel economy it seems hardly any better than the standard 2.5 L engine version (JCOB mode 18.6 km/L versus 14.4 km/L; WLTC mode 14.0 versus 13.2), and on the highway the figure is worse because it has to carry a heavy battery (16.0 versus 16.4). The little bit of extra torque appears only to be useful in a small speed range (about 30-50 kph) to get the car up to speed in town, but not enough to get it speedily onto the highway. Of course, published official fuel/km figures are never realised in actual use, so until such data come out (in Japan on the Minkara website) we can only rely on the Subaru figures. Otherwise, the retail price of the e-boxer version is only 75,600 yen more than the premium 2.5L version, and has slightly more options, such as brown leather seats. There is also an X-Break version with bits of orange here and there, perhaps aimed for the younger set, but the body colour is limited to black, white and greys. Additionally, the Forester no longer has fixed points for roof cross bars, so the car must be ordered with roof rails as a factory option, if the user intends to carry something on the roof.
Mike wrote on October 25, 2019 - 12:02am Permalink
When can l purchase the Forrest in Alaska??