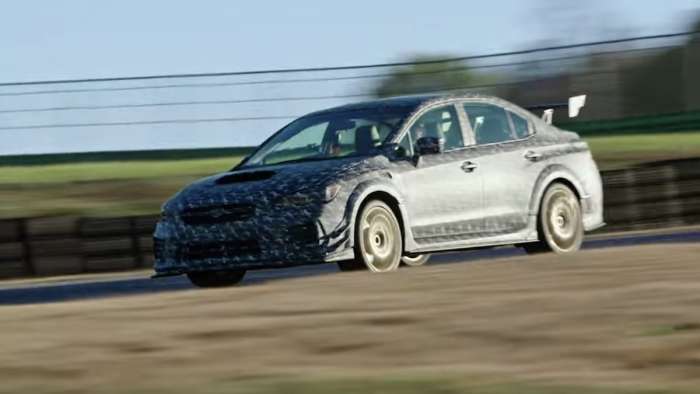 Subaru Teases New WRX STI S209; This One Is For U.S. Fans

Subaru teases a new WRX STI that is coming to the NAIAS in January. It’s likely a WRX STI S209 and this time it’s for U.S. fans.
Advertisement

Subaru of America is teasing a new WRX STI in a video they just released and it’s likely the Subaru WRX STI S209. The “S” Series has been Japan-only limited edition models up until now, but that could be changing soon. The Subaru video below suggests the new STI will be unveiled at the North American International Auto Show (NAIAS) in Detroit on January 14.

A camouflaged current-generation WRX STI is seen speeding around Virginia International Raceway as Subaru teases the new model coming to NAIAS. The short 30-second video ends with the caption, “From Japan With Love,” eluding to the fact the U.S. has never had this “S” model before. Earlier in the week, Torque News led with a story about Subaru of America filing a US patent for the name "S209" as pertaining to "automobiles and structural parts and structural fittings therefor" as well as "floor mats for automobiles.”

In the video description, Subaru says, “Something special from Subaru Tecnica International is coming to America for the first time ever,” followed by “1/14/19 at the North American International Auto Show.” This would tell us U.S. performance fans are getting a limited edition WRX STI S209, a car never sold in North America.

What engine and power will it get?

These are the big questions since the Japan-spec S208 released last year at the Tokyo Motor Show, comes powered by a STI hand-built EJ20 2.0-liter DOHC 16-valve dual AVCS twin scroll turbo boxer producing 329 PS (325hp). Subaru Techica International lowered the center of gravity on the S208 with the adoption of a carbon fiber roof and gave it a special rear wing. This wing can be seen in the video below.

We expect to see the new STI being unveiled at NAIAS in January to get a power increase over the stock WRX STI producing 310hp. Will it get the EJ25 2.5-liter power plant in the current STI or the Japan-only EJ20 2.0-liter Boxer engine? We do know it will be a limited production model and Subaru will likely only build around 500 examples of the higher-performance STI S209. We will know complete details in three weeks. Stay tuned.

Watch From Japan with Love video