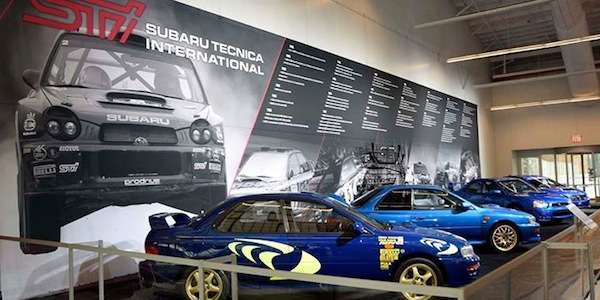 The 2015 Subaru WRX STI has a long and storied race history. Check out the video as STI is on the stage at NYIAS.
Advertisement

For Subaru, the 2015 New York International Auto Show is all about Subaru Tecnica International (STI) the motorsport and performance division for the Japanese automaker. They chose this show to showcase STI’s tuning and performance talents to the U.S. market. They specifically developed the 2015 Subaru BRZ STI Concept machine to display those talents. They also brought four generations of the WRX STI iconic sports car to NYIAS. Here’s a run down of each generation of WRX STI.

The 2015 Subaru WRX STI was first unveiled at the 2014 North American International Auto Show in Detroit. It was launched in the U.S. market first and was completely remodeled with new exterior styling, a new interior and received a stiffer upgraded suspension. The 2015 STI kept the same 2.5-liter boxer engine that develops 305hp. The 2015 WRX STI came in sedan body styling as Subaru dropped the 5-door hatchback model. Subaru also dropped the Impreza name to differentiate the performance car from the Impreza line. Subaru brought the 2015 WRX STI that set the new world record at Isle of Man by Mark Higgins.

Unveiled at the 2007 Tokyo Auto Show, the 2008 Subaru Impreza WRX STI was the latest edition of the high-performance car launched during the 1990s. The new WRX STI came as a sedan and a new hatchback that offered the utility of a five-door. It featured wider wheel arches that gave the STI a more muscular look. The JDM version was powered by a 2.0-liter boxer engine with twin scroll turbocharger and developed 304 hp, while all the other global models were fitted with a 2.5-liter boxer with a single scroll turbocharger producing 305 hp.

In 2005, Subaru changed the WRX STI and it came with a number of exterior upgrades like larger headlights than the previous generation, redesigned front intakes, an enlarged hood scoop and projector beam fog lights. The interior of the WRX was also redesigned, the tachometer being completely moved on the center of the dashboard while the speedometer was placed on the right side.

The Subaru Impreza already had an important presence in the market, and the 2003 version received a number of new features. The new model had an illuminated ignition key ring while the sedan has a pre-installed rear spoiler. The Japanese automaker introduced a new color, the Sonic Yellow, but only approximately 1,500 units were produced. All these models had 17 inches wheels produced by Subaru. In 2003, the WRX STI was introduced in the U.S. market for the first time as a 2004 model.

The 2000 model of WRX STI marked the introduction of the S-series in Japan which were more powerful than the base versions of STI. S-series had engines which developed 280 horsepower and had a higher top speed than the standard models. The S201 had a bigger airsplitter while the entire suspension received upgraded parts over the ones installed on the base STI models.

STI was established to undertake the motorsport activities of Subaru in 1988. The 1998 Impreza WRX STI is the sportiest version of Impreza ever created, based entirely on the car produced by STI for the FIA World Rally Championship. Because of their motorsports success, Subaru began the mass production of the WRX STI and launched the car in Japan. The car was a success and was then launched in Australia in 1999 and Europe in 2001. The WRX STI brought so much positive response, Subaru launched the Impreza WRX STI in the U.S. in 2003.

Today’s 2015 Subaru WRX STI has a rich and storied racing history on which it draws its performance attitude. The 2015 STI performance sports car has a one of the richest racing pedigrees from where it gets it quickness and toughness. Since the WRX STI made its debut in the World Rally Championship, the performance car has taken on the most grueling challenges in motorsport and thrown down some of the most extreme acts of performance. This racing pedigree is what makes the new 2015 Subaru WRX STI what it is today.