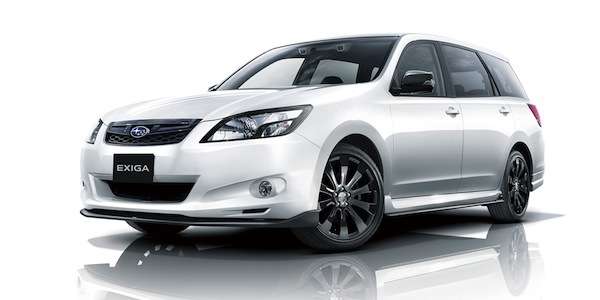 Subaru plans to differentiate itself with new 7-seat SUV

The all-new Subaru 7-seater that will be the Tribeca replacement will likely go on sale in the next two years. Will the new Subaru flagship look like the 2015 Outback?
Advertisement

Subaru is in the process of designing a new 7-seat SUV that will compete with the strong selling Toyota Highlander, Nissan Pathfinder and Honda Pilot. Automotive News spoke with Subaru executive Nobuhiko Murakami, senior vice president of global marketing for parent company Fuji Heavy Industries, who said the new 7-seater will be built because that mid-size SUV market “Is so strong.”

What Subaru is deciding on now, is what the new SUV will look like. It won’t likely look like the new Exega that made it launch in Japan last year, but will it resemble the new 2015 Outback? Subaru is being tight-lipped about the future project, but Masayuki Uchida, the Senior Product General Manager of Liberty (Legacy in the U.S.) and Outback products in Australia, told Motoring that the Tribeca's replacement could be based on a modified version of the platform used by the Liberty and Outback.

Subaru’s new 2015 Outback has been a resounding success and Subaru is looking at its success in the U.S. Automotive News says Subaru is trying to deciding whether to make the new crossover a "big brother" with Outback or if the new 7-seater should get distinctive styling similar to the strategy with the Forester, Subaru’s smaller SUV. Uchida did say, "The Three-row SUV has to be bigger than Liberty and Outback."

With the new SUV competing against vehicles like the Hyundai Santa Fe, Kia Sorento, Nissan Pathfinder, Mitsubishi Outlander, Toyota Highlander and Honda Pilot, Subaru will need to set itself apart. Murakami went on to say, "How can we differentiate the position of our product? That is the fundamental strategy."

New 7-seater will be larger than Tribeca

The new flagship SUV from Subaru would need to be larger than the outgoing Tribeca because of its cramped third-row seating and limited cargo capacity. Murakami said the new vehicle will be primarily build for the U.S. market. He told AN, "Our resources are limited, and we have to develop our product by putting our major focus on the United States. This is the only way we will survive."

CHECK OUT: Is mystery Subaru hatchback the refreshed XV Crosstrek?

Subaru is expanding production capacity at their Indiana plant in the U.S. and the new seven-seat Subaru SUV will be built in the U.S. Expansion at the Indiana factory will be completed by 2017 and would be ready to handle production of the new model. Subaru executives have acknowledged there will be strong interest from many other markets, including Australia.

There have been rumblings that the new Subaru 7-seat flagship model could be unveiled at the Tokyo Motor Show 2015 possibly in concept form. The new vehicle will arrive in the U.S. as a production version and could be in U.S. showrooms in late 2016 or early 2017. Will the new flagship SUV look like the new 2015 Subaru Outback? The Tokyo Motor Show 2015 runs from October 29-November 8, 2015. Stay tuned.

joe c wrote on March 24, 2015 - 9:07am Permalink
My wife just purchased a Subaru Outback 2014 w 5k miles in excellent condition. It is a great vehicle for her needs, but I would be interested in a larger version of it, longer, with more cargo space. Hopefully the new one that is being talked about will fill that need.
pulse wrote on March 30, 2015 - 3:37pm Permalink
Don't want a stretch Outback. (My un-stretched model is fine) Do want a Levorg (with a new name).
Pulse wrote on March 30, 2015 - 3:38pm Permalink
Offer it with a turbo diesel and maybe we can talk Subaru...
Natalie Rivera wrote on April 12, 2015 - 5:10pm Permalink
good. im tired of all the other cars... we had a subaru tribeca only 2nd row and liked it back then. then we got a subaru wrx... had to get rid of it for a 4th baby in Oct 2013 and got a stupid Grand caravan we all hate. has no a/c no heat in the 2nd and 3rd rows. car seat configuration is stupid! we want a 7 seater subaru!!!
Robert McGuire wrote on September 7, 2015 - 12:42pm Permalink
Don't make a stretched out wagon because it won't sell, make something with a lot of room on inside.
Dave Klockau wrote on November 10, 2015 - 9:39pm Permalink
Our 1985 Subie 4X4 wagon was a tank-in a good way. It would plow through the worst weather you coud imagine. It's likely still running somewhere in MO. We helped my daughter buy a 2014 Forster and it reminds me a lot of our old wagon. Considering either a new Outback or the new 7 passenger SUV. They shoud use the Forester as a template and drop in a flat 6 cylinder or better a diesel.
Pulse wrote on November 19, 2015 - 5:51pm Permalink
I'd look toward something more Ford Flexy or old Jeep Wagoneer-esque - but with a modern Subaru take on the styling. Something bigger - more substantial.