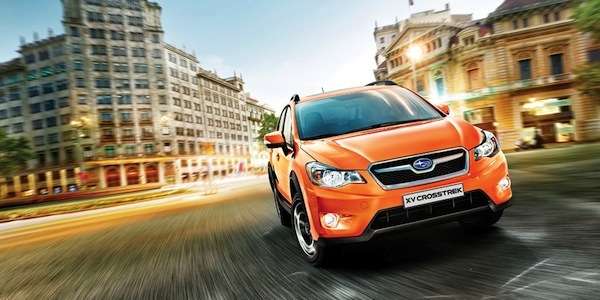 Last week we were wondering if the mystery hatchback prototype seen testing in the U.S. could be a WRX/STI hatch model. It turns out its likely the new 2016 Subaru XV Crosstrek.
Advertisement

A mystery Subaru has been seen here in the U.S. and it could be the new 2016 Subaru XV Crosstrek. We originally thought it could be the WRX/STI hatchback, but the Subaru that’s been seen is clearly a crossover with higher ground clearance. The XV Crosstrek that came out in 2012 is due for a mild refresh and this is likely the model change that’s been expected. You can see the images here.

Of course XV fans would like to see a new XV come with a turbocharged 2.0-liter powerplant and more power. The XV in the photos from World Car Fans shows a significant hood scoop which would suggest a turbo engine under the hood. A source close to Subaru told us that XV fans, dealers and Subaru of America want a turbo model, but nothing has been officially confirmed.

DON’T MISS: Subaru Legacy only one of 9 cars on IIHS list with zero deaths

If XV Crosstrek does get a turbocharged engine, it would likely come with the WRX-sourced 2.0-liter turbo boxer from the Forester XT that produces 250 horsepower and 258 lb. ft of torque. The sporty XV would be a good model for Subaru to give more hp and driving enthusiasts would respond well to the new performance model. Currently the XV’s 2.0-liter naturally aspirated engine produces only 148 hp and 145 lb ft of torque.

When the Subaru XV Crosstrek arrived in the U.S. in the fall of 2012 as a 2013 model, it received instant success. XV Crosstrek arrived as a five-door crossover that is based on the Impreza hatchback, but comes with an expanded capability chassis with 8.7 inches of ground clearance, larger tires with 17-inch alloy wheels, larger front brakes, a larger fuel tank and special black wheel arch and rocker panel cladding.

XV Crosstrek is the ideal platform for a performance model

XV is the ideal platform to get a turbo engine with more power. At the launch, Subaru said, "The car clearly expresses "Fun to Drive", an integral part of automobiles' essential value, in its attractive, straightforward design. It boasts a new type of crossover design with larger, unique tires and wheels highlighting a good balance with the body's sharp, stable looks, which gives this new model distinctive product appeal. It's an excellent design that showcases Subaru brand's characteristics."

It’s not like Subaru needs to prop up sales of the XV in North America, but the XV Crosstrek is due for a refresh. January was the best ever month for XV Crosstrek in the U.S. and it saw a 36 percent increase in sales over the same month last year. In Canada, XV had its best January ever with 486 units retailed, an increase of 66.4 percent. Our source told us the 2016 XV Crosstrek will get a mid-model refresh and the newly-updated XV will arrive at U.S. dealers this summer. Will it come with a 2.0-liter turbo engine? Stay tuned.

Jon Davis wrote on February 8, 2015 - 8:36pm Permalink
Why don't they do something to improve the fuel economy instead of making it faster and more fun to drive. It's an SUV. And it will be a lot more fun if you can actually afford to drive the thing somewheres.
mark wrote on February 9, 2015 - 7:50pm Permalink
they did! they made a hybrid version. Its good they are making a performance model for the WRX enthusiasts who enjoy the outdoors and snow. I for one have been waiting for this, I hope it comes to the states.
WhyNotV2 wrote on April 7, 2015 - 1:28pm Permalink
Yeah, except the Hybrid gets like 1mpg more than the non-hybrid. With that said, I get fantastic mileage from my 2013 Crosstrek. I've had it since December of 2012 and since then, I'm averaging 34-35 MPG. I drive a bit on the conservative side in that I don't hammer on the throttle when starting from a stop, drive the speed limit and look ahead a bit so I'm not racing up to an intersection/light just to stop.
DS wrote on March 5, 2015 - 12:00am Permalink
Subaru turbos still get amazing mpg and honestly its something that is needed when you are someone who is towing small thigns liek canoes and dirtbikes and crossing over mountains in the mid east, rockies, and appalachia. In which case the turbo is going to net you MORE mpg...
Daniel S. wrote on April 8, 2015 - 3:29pm Permalink
I've been wanting one of these since its debut, drove one both a manual and auto version last fall but decided to hold off. Now I am teetering on the Screaming Yellow Special Edition, but I sure would like another 25-40 hp and a torque increase for going off/back road adventures in the Pac NW. Guess I may have to wait it out till this coming Winter (didn't have one this past year). The Ford Focus will do the job till then.
mba wrote on April 17, 2015 - 6:06pm Permalink
I held off on a the '15 WRX and '15 Impreza .... I guess I really wanted the looks of the WRX but the utility and comforts of the wagon Impreza.....this alleged Crosstrek (w/2.0T) should cover both. Can't wait.