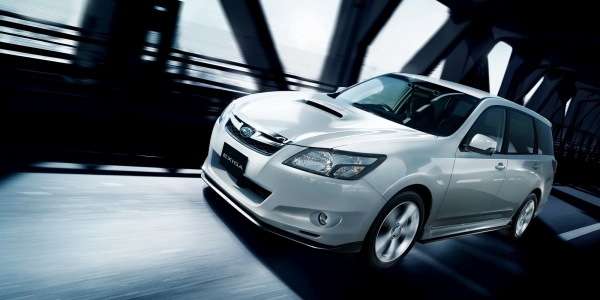 Subaru has introduced a new 2015 Exiga Airbreak 7 seat SUV for the Japan market. Is this the forerunner of the U.S. model?
Advertisement

Subaru is working on a new seven-seat SUV to replace the aging Tribeca that is being discontinued after this year. The Japanese automaker has unveiled a new 2015 Exiga Airbreak seven-seat SUV to the Japan market that gives us an idea of what the U.S. model could look like when it hits U.S. shores.

This year, Subaru is rolling out a redesigned 2015 Legacy sedan and 2015 Outback wagon here in the U.S., and after that, they plan a new seven-seat SUV to replace the aging Tribeca. This new model 2015 Exiga Airbreak 7 seat SUV is a special edition version of the Exiga and will be released on August 22, 2014 in Japan.

Exiga seven-seater will be attractive offering in global markets

Subaru has improved the Exiga with new refinements and comes up with this new Airbreak special edition model that is likely a forerunner of the U.S. model that could be introduced in 2016 or 2017. The new 2015 Exiga Airbreak gets a number of enhancements that would make it an attractive offering here in the U.S. as well as Japan and other global markets.

This new seven-seater Airbreak gets the EyeSight new-generation safety system that we see on the 2015 Legacy and Outback. It also comes with a new panoramic glass roof that will come standard on the new model. It will also feature 17-inch aluminum wheels, satin plated remote control electric retractable door mirrors and an exclusive quartz blue pearl exterior paint.

On the inside, this new seven-seat SUV will get enhanced features like champagne gold stitching on the seats, keyless access and push start and 8-way power drivers and front passenger seats. It also gets a leather-wrapped steering wheel and Alcantara leather seats with red stitching.

Underneath, this special edition SUV will come with either a 2.0-liter turbo boxer engine or the larger 2.5-liter boxer four-cylinder. It will come with Subaru’s Symmetrical all-wheel-drive and comes mated to either a Lineartronic CVT automatic or a five-speed automatic gearbox. Here in the U.S. we likely only see the CVT for fuel-mileage reasons.

It looks like Subaru is introducing this new 2015 Exiga Airbreak SUV in the Japan market first and then the U.S. market will see some form of this seven-seater introduced in the U.S. as a 2016 or 2017 model. It should be an attractive offering for U.S. buyers with seating for seven, a panoramic glass roof and the Eyesight safety system. Stay tuned to Torque News for the latest Subaru seven-seat SUV news.

Other Subaru seven-seat SUV stories of interest.
2014 Subaru Tribeca will be replaced by all-new 7 seat SUV