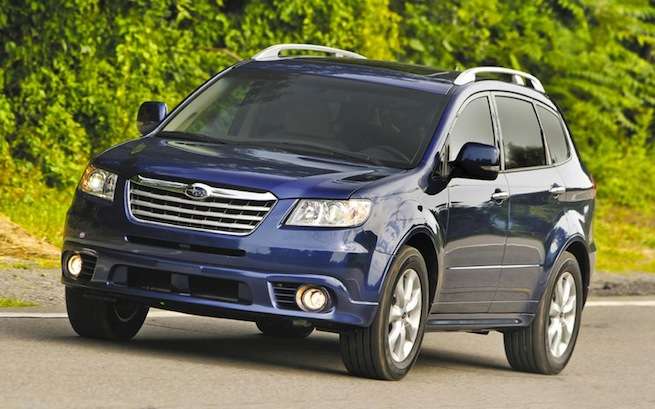 Subaru is finally killing the Tribeca and the 2014 model will be the last before an all-new mid-size SUV is launched.
Advertisement

The Tribeca has been killed by Subaru and it will be the best thing that could happen to the three-row SUV. It needed to be put out of its misery as it has been on its death bed for a number of years. Jessica Tillman, Subaru Product Communications Manager, confirmed to Cars.com, that Tribeca has breathed its last breath. She told them that the 2014 model year will be its last.

The report says production of the 2014 Tribeca in Japan will end in January and delivers to global dealers in the U.S., Canada, Australia, Europe, Chile, Argentina, China, and parts of Southeast Asia will end in February. The Tribeca is Subaru’s worst performing vehicle in terms of sales around the globe. And they have only sold 1247 units in the U.S. in the first nine month’s of 2013. So it’s well over due that Subaru would ax the underperforming Tribeca.

What will Subaru do to fill the mid-size SUV void? Tillman also confirmed to Cars.com that the Japanese automaker will introduce an all-new seven-seat SUV in the near future. She was quoted in the story, “The company has announced that it plans to return to the midsize SUV segment with a three-row vehicle in the future."

We knew it was coming, and that’s good news for Subaru fans. The all-new seven-seat SUV will be developed from the ground up similar to the 2014 Forester that is selling like crazy. We can count on the new mid-size SUV to have the latest Subaru technology and maybe a few new goodies we haven’t seen before.

The new Subaru SUV will need to stand out from the pack, where the Tribeca never did. There was nothing wrong with the Tribeca, but there wasn’t anything that made it stand out either. The competition in the seven-passenger crossover-SUV segment is stiff indeed. Subaru has done well with their niche market all-wheel-drive vehicles and the brand is growing quickly and attracting new buyers. But they couldn’t compete with Tribeca in this segment with the Hyundai Santa Fe, Kia Sorento, Nissan Pathfinder, Mitsubishi Outlander, Toyota Highlander and Honda Pilot.

Say goodbye to the 2014 Subaru Tribeca, and we’ll look forward to seeing what Subaru will unveil when they bring out an all-new seven seat mid-size SUV. Look for Subaru to launch the new mid-size crossover in the next three years. Stay tuned to Torque News.

Tesla Contemplates A New Strategy for China Retail even As Sales Boom
Jay Leno on Elon Musk & EVs: “I Think He Should Get ... Credit"
END_OF_DOCUMENT_TOKEN_TO_BE_REPLACED