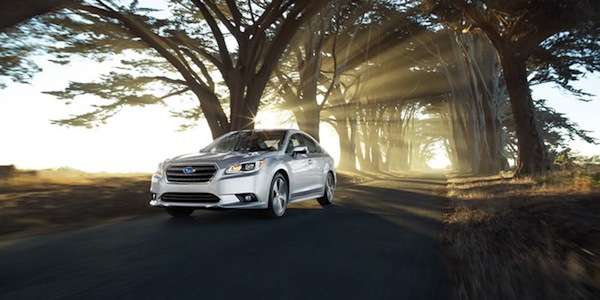 Subaru Canada has just announced the launch of the 2015 Legacy sedan. And it comes with one sporty feature that U.S. buyers don’t get.
Advertisement

Subaru Canada has just announced the all-new 2015 Legacy sedan that will arrive in Canadian showrooms this summer. But it comes with a six-speed manual transmission in the 2.5i Touring model equipped with the 2.5-liter 4-cylinder boxer engine. All other models come equipped with the new-generation Lineartronic CVT automatic transmission. What makes the new six-speed manual gearbox special?

U.S. buyers don’t get the option of getting the new-generation Legacy sedan with a manual gearbox. All they can get is the Lineartronic Continuously Variable Transmission (CVT) automatic gearbox. Subaru of America has dropped the manual gearbox option for the all-new 2015 Legacy sedan. The outgoing 2014 Legacy featured the fully synchronized six-speed standard gearbox and the five-speed adaptive electronic automatic.

These were both dropped in U.S. 2015 Legacy’s in favor of the new CVT. It was all done so the new Legacy could get improved mileage over the outgoing model. But why do the Canadians get the six-speed manual and U.S. buyers get left out in the cold? It’s likely because of tighter fuel mileage regulations here in the U.S. Subaru Canada can offer the six-speed manual because they can slip it into their lineup and still meet Canadian fuel-mileage standards.

The Canadian 2015 Legacy with 2.5i Touring Package trim is priced at $26,495 Canadian and comes with the 2.5 -liter four-cylinder boxer engine. This is the only Canadian 2015 Legacy that will come with the 6-speed manual transmission. Subaru Canada doesn’t give us fuel-mileage estimates, so we can’t compare the six-speed manual vs the new Lineartronic CVT. The engine produces 175 horsepower and 174 lb.-ft. of torque.

Subaru Canada has just announced the launch of the 2015 Legacy sedan that will arrive in Canadian showrooms this summer. The Canadian 2015 Legacy gets one sporty feature that U.S. buyers don’t, the six-speed manual gearbox.

Other 2015 Subaru Legacy stories of interest.
Subaru drops two significant fixtures on 2015 Legacy to get 36 mpg

Carl wrote on May 30, 2014 - 10:11am Permalink
Fixed that one sentence for you, taking out the redundant word. It’s because of tighter fuel mileage regulations here in the U.S. The minor detail that the Legacy 2.5i will now be rated at 26/36/30 mpg - which is virtually identical to the Imprezza 2.0 (27/36/30 mpg) can't be of any influence, can it? Realistically, with the new interior and exterior, if Subaru actually advertises the Legacy, I expect to see the sales of this car go up and take market share away from Toyota and Honda.