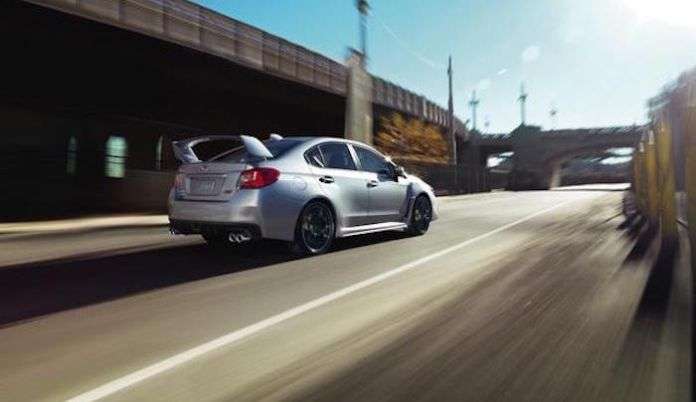 Subaru of America (SOA) is launching a number of 50th anniversary models to celebrate the Camden, NJ automaker’s birthday in the U.S. market. This was announced earlier this year, but the Japanese automaker just confirmed there will be special 2018 WRX and WRX STI Limited Edition models coming next year.

Subaru says the 2018 sport-tuned WRX Limited trim sedan and the performance-tuned 2018 Subaru WRX STI Limited trim will get special 50th anniversary decorations to help celebrate 50 years in the U.S. market next year. The WRX/STI editions will feature a new, common color (not announced) and will come with special badging.

They must be Gold

50 years is certainly special and it’s the “golden anniversary,” so we are speculating the color scheme on the new WRX and WRX STI limited editions should be gold, right? It would fit with traditional anniversary colors and it doesn’t match any color currently in the Subaru lineup. So it would be only fitting for 50th Anniversary “Gold” Limited Edition models to roll out early next year.

Subaru also announcement every model in the Subaru lineup they sell in the U.S. will get its own Limited Edition trim. So consumers will see a new commemorative 50th anniversary Outback, Forester, Crosstrek, Impreza, Legacy and BRZ too. These models will also feature the new special edition color and each will be based on their top trim with special badging.

All other top trim models get the special color and badging

The 2018 Forester 2.5i Touring and 2018 Forester 2.0XT Touring would also get the 50th anniversary trim, along with the top-of-the-line 2018 Crosstrek 2.0i Limited model. The BRZ Limited will also be included with commemorative trim. All these models are coming from Subaru Corporation’s factory in Gunma, Japan.

Subaru did not reveal when they will roll out the “Gold” 2018 Subaru WRX Limited and 2018 WRX STI Limited 50th anniversary commemorative models, or how many will be produced. We are guessing it will be on or near February 15, 2018 when they were founded 50 years earlier in 1968. Pricing will also be announced closer to dealer launch. Stay tuned.