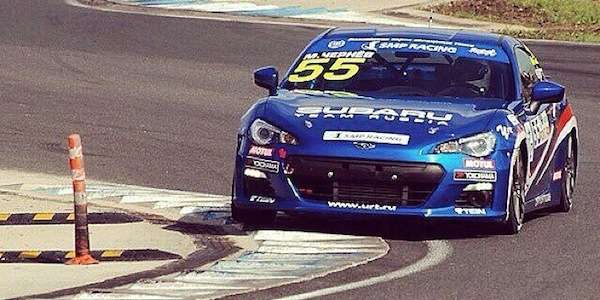 The Subaru BRZ has been doing well in the Russian Series racing circuit and gets another victory. What did they overcome to win?
Advertisement

Uspensky Rally Tecnica is the official racing partner for the Subaru BRZ team in Russia and they have built a 250hp turbocharged BRZ and it’s doing well. The Subaru BRZ continues to delight with excellent results. This weekend at the "Smolenskoe ring" track, BRZ had the best qualifying time in the Super production class with a fast 1.38.660 lap time.

The start of the race went well for the Subaru BRZ team and they lead the RCRS Super Production class for most of the race. Then with only four laps to go, the BRZ developed a problem and the driver “felt something crunch in the back” of the two-door sports coupe. He lost power in one rear wheel and was forced into the pits. The team discovered that the extreme elevation changes on the track and the lengthy testing before the race damaged one of the rear wheels.

This was the first issue Uspensky rally Tecnica has experienced with the Subaru BRZ, but the tech crew was able to get the problem fixed before the second race. Driver Max Cernev ran a flawless second race in the BRZ. Despite the setback in the first race, Subaru Team Russia made up ground and Chernev came in first place among the Super Production class cars and eighth in the overall standings with a best time of 1.40.645.

Uspensky Rally Tecnica (URT) is Russia’s version of STI and Chernev is the Russian driver who pilots this 250 hp Subaru BRZ. Chernev is a multiple prize winner of the Russian Championship Karting, and participant and winner of various competitions in the road-racing circuit, and a three silver medalist in RAF.

URT has built a very competitive BRZ and installed a Greddy turbocharger on the 2.0-liter boxer engine which develops an overpressure of 0.5 bars. It develops up to 250 hp at 7250 rpms. The turbocharged BRZ develops 250 Nm of torque from a broad rage of 2500 to 7500 rev / min.

Next up for Subaru Team Russia and the Subaru BRZ is the 7th race in the series that will be held in the city of Sochi September 13-14. Stay tuned to Torque News for the latest Subaru BRZ racing news around the globe.