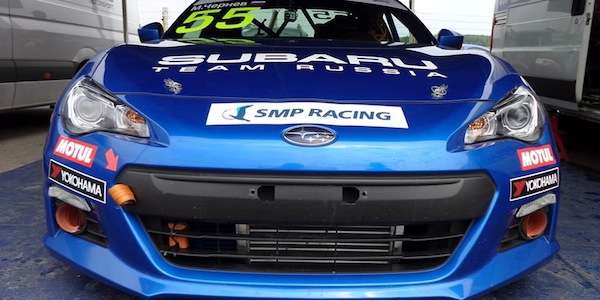 Team Subaru Russia is competing in the Russian series circuit racing in a specially built Subaru BRZ RCRS. Fans would like to see a production 2015 BRZ with 250hp.
Advertisement

With the 2015 Subaru BRZ getting ready to make its dealer launch, performance fans would like a turbo and more power from the sports car. That’s what Team Subaru Russia has done to the Subaru BRZ as it prepares to race in the Russian Series racing circuit (RSKG). The BRZ will run in the Touring class that allows cars up to 250 horsepower.

Team Subaru Russia has built this specially designed Subaru BRZ and stuffed a turbocharger under the hood and given it 250 horsepower so it can compete in this Russian race series. This is exactly what performance fans would like to see from the production two-door sorts coupe. For now, Subaru will keep this race car on the track.

Maxim Chernov is the Russian driver who will pilot this 250 hp Subaru BRZ and he’s a multiple prize winner of the Russian Championship Karting, and participant and winner of various competitions in the road-racing circuit, and a three silver medalist in RAF.

Like Subaru Tecnica International (STI) from Japan, Subaru Russia has their own top engineers who have prepared this BRZ. They are called "Uspensky Rally Tecnica" and have installed a Greddy turbocharger on the 2.0-liter boxer engine which develops an overpressure of 0.5 bars. It develops up to 250 hp at 7250 rpms. The turbocharged BRZ develops 250 Nm of torque from a broad rage of 2500 to 7500 rev / min.

The car was homologated for international racing requirements by FIA. Motul is the official technical partner of the team which provides performance lubricants for the 250 hp BRZ race car. The BRZ raced in the third stage of the RSKG on the famous track Nizhny Novgorod. The track has 15 turns over the total length of 3222 meters and 16 laps.

The first race saw the team qualify 15th, and by the end of the race Team Subaru Russia was ranked 6th in the class. The second time Subaru BRZ RCRS went out, on July 5 and 6, in the fourth stage of the Russian Series racing circuit they were at the circuit in Kazan Kazan. Team Subaru Russia successfully launched in the morning workout and subsequent qualification. In training, driver Maxim Chernov drove a fast lap of 1:34.824 and was in 8th position in the Touring class.