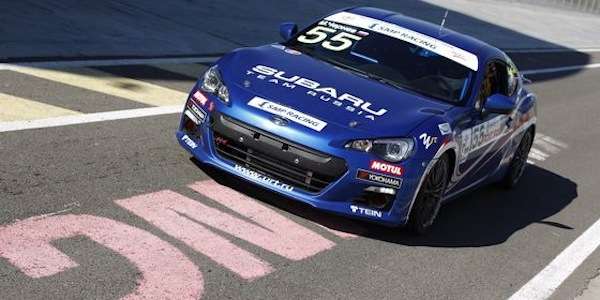 As the 2015 Subaru BRZ production car launches, the sports coupe is making inroads into racing around the globe.
Advertisement

This past weekend at Kazan racetrack Kazanring in Russia, the Subaru BRZ continues to excel at motorsports around the globe. We see the BRZ two-door coupe running well at the All Japan Rally, and now in Russia competing in the Russian Series racing circuit. Uspensky Rally Tecnica is the official racing partner for the Subaru BRZ team and their engineers have built a 250hp turbocharged BRZ to compete in the series.

Uspensky Rally Tecnica (URT) is Russia’s version of STI and Max Chernov is the Russian driver who pilots this 250 hp Subaru BRZ. Chernov is a multiple prize winner of the Russian Championship Karting, and participant and winner of various competitions in the road-racing circuit, and a three silver medalist in RAF. URT installed a Greddy turbocharger on the 2.0-liter boxer engine which develops an overpressure of 0.5 bars. It develops up to 250 hp at 7250 rpms. The turbocharged BRZ develops 250 Nm of torque from a broad rage of 2500 to 7500 rev / min.

Originally, the team planned to run in the super-production class, but a decision by the Russian Automobile Federation put them in the Touring class with more powerful cars. But that didn’t last long. On Saturday, after the qualifying session, race officials of the RAF CSC met and reported that after the necessary documents and conducting tests with independent drivers, the Subaru BRZ will now be officially enrolled in the super production class.

The first race was held just after the rain stopped and the track was still wet. Having started tenth, Max came in third in the Super production championship class and ninth in the overall standings, showing the best lap time of 1:42.767. The second race was even more successful and Team Subaru Russia, overtook cars like the Honda Civic VII (EP) and the Lada Granta. They finished seventh in the Touring class and first in the Super Production class.

With the Subaru BRZ now running in the Super Production class, Team Subaru Russia is going to be very competitive and they win this past weekend at Kazan racetrack Kazanring in Russia. With a 250 hp turbocharged engine, it shows just how fast and competitive the two-door sports coupe can be. The next race will take place on the "Smolensk Ring" on August 22-23. Stay tuned to Torque News for the latest 2015 Subaru BRZ racing news.

Other 2015 Subaru BRZ stories of interest.
Is a new Subaru BRZ STI being developed from All Japan Rally involvement?