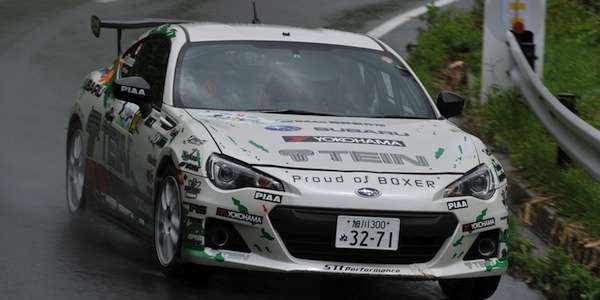 Is a new Subaru BRZ STI being developed from All Japan Rally involvement?

Subaru has been rally-racing since the early 70s and that’s where the Subaru teams developed today’s 2015 WRX STI performance sedan that just made its global launch. The seeds for the current successful Subaru Rally Team USA were first sown when Jack Coyle, who owned a Subaru dealership in San Bernardino, California, built a rallying Subaru FF-1. "Pete" Petrowsky, a salesman at the dealership, first drove it in the Baja 500 off-road race in 1971.

BRZ competes under STI for the first time

Subaru brings two drivers this year to the All Japan Rally Championship, Katsuta Norihiko and Adachi Sayaka will compete in the Subaru WRX STI, and for the first time, Subaru and Subaru Tecnica International (STI) will bring a new driver Kamata Takuma to compete in the new 2014 Subaru BRZ rally car. STI brought a full team of top Japan Subaru mechanics to support the WRX STI and BRZ race teams.

How did BRZ do in the JRC?

The 2014 Subaru BRZ entered the JN5 class of the All Japan Rally and in spite of heavy rains last weekend, showed how well the rear-drive coupe can do on the gravel. The BRZ won the JN5 class and stayed the series leader. The STI team was able to bring home a victory for the BRZ sports coupe. The team said it handled the dirt roads well and said, “the stiffness of the chassis and roll of the Subaru BRZ was alive." during the All Japan Rally.

Does STI’s involvement with the 2014 Subaru BRZ mean they are developing a new Subaru BRZ STI performance model? In the past, STI has used their race experience to develop the 2015 Subaru WRX STI production car we have today and we can only assume STI is also working on transferring their race knowledge with the BRZ to a new performance BRZ STI. But it takes years of motorsports insights to filter down to a production model. STI is also running the 2014 BRZ GT300 in the SUPER GT Series in Japan. It looks like STI is serious about developing BRZ to reach its full performance potential. Stay tuned to Torque News for the latest Subaru BRZ STI developments.

Other Subaru BRZ STI stories of interest.
2015 Subaru BRZ coming with performance upgrades but no STI yet