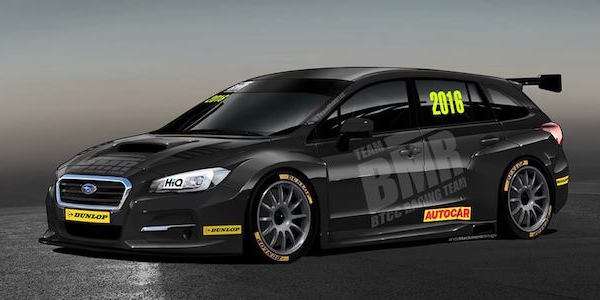 Subaru UK is back into motorsport and they are bringing the Levorg sports tourer to BTCC. A rear-wheel-drive Subaru?
Advertisement

This is the Levorg sports tourer U.S. performance fans would like to see, yet it won’t ever make it to U.S. shores. Ever since Subaru dropped the WRX and WRX STI 5-door hatchback, fans have been asking for one. Subaru sells the Levorg hatch in Japan, Europe and Australia but not the U.S. Race fans in the UK will get to see the new Levorg with a new race livery this season. Subaru is known for the Symmetrical AWD, yet this Subaru wagon won’t be all-wheel-drive.

A rare Subaru without all-wheel-drive

Subaru UK is getting back into racing and they announced they will enter the popular British Touring Car Championship this season. Team BMR will carry the Subaru badge and will run the new Levorg wagon in the series. The iconic Subaru brand is known for their rally cars with all-wheel-drive, but this Levorg sports tourer is a different racer. The regulations call for only rear drive cars so this wagon gets a unique chassis set up.

Paul Tunnicliffe, Managing Director for Subaru UK and Ireland says it won’t be hard to convert the Levorg wagon to rear drive. “It can be easily developed into rear-wheel drive to comply with the BTCC regulations so we can’t wait to see how it goes against very established competition.” Subaru says they have committed to a three year agreement with the team.

BMR is running a pair of rear-wheel drive Subaru Levorg Sports Tourers, becoming the third ever wagon in the BTCC after the Volvo 855 in 1994 and Honda Civic Tourer from 2014. Championship drivers Jason Plato and Colin Turkington who finished second overall and fourth respectively will be piloting the two Subarus. Plato will be racing a rear-wheel drive car for the first time in the BTCC with the Levorg, while Tarkington won the 2009 and 2014 titles in rear-wheel drive BMWs.

Subaru announced their global race schedule last week and will run the WRX STI in the Nurburgring 24-hour race, The BRZ in the SUPER GT Series in Japan and two WRX STI’s in the Global Rallycross Championship. The Subaru Levorg will be a good addition to their motorsports activities in the BTCC. Stay tuned.