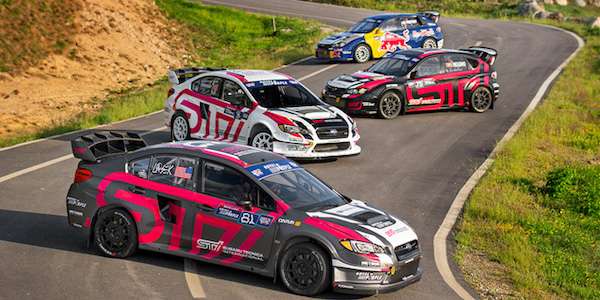 Subaru will participate in the Nurburgring 24-hr race and GRC with the 2016 WRX STI, and the SUPER GT Series with BRZ. What improvements are coming to the cars?
Advertisement

Cars like the 2016 Subaru WRX STI and BRZ sports coupe have been developed from Subaru’s many years of motorsport activities. It’s in their DNA. The performance division, Subaru Tecnica International (STI) will continue to develop their race cars and use that technology to develop better performing cars for the Subaru brand. What’s in store for 2016?

New changes to the cars are coming as Subaru announces their motorsport activities for 2016. It looks like another exciting year for Subaru race fans. Subaru and STI will participate in the Nurburgring 24-hr race with the 2016 WRX STI, the SUPER GT Series with BRZ and GRC with the 2016 WRX STI cars. Subaru practices “Kaizen” in motorsports which is a continual improvement in everything they do. They've made improvements to all three race cars that will help them to better compete with the big manufacturers around the globe.

STI isn’t standing pat with last year’s winning car. Subaru won the Nurburgring 24-hour race last year and STI will compete again in 2016 and defend their title in the SP3T class (for sub-2 liter turbocharged vehicles). Subaru is competing for the 9th consecutive year and has won the grueling race three times, in 2011, 2012, and 2015.

The SUPER GT Series is widely regarded as Japan’s top motorsports category, and this year STI will again bring the Subaru BRZ GT300 and compete in the highly competitive GT300 class. STI has made changes to the BRZ’s chassis and has switched the front tires from 300/680R18 to 330/710R18 to enhance cornering and braking. Other refinements include an even lighter body, improved aerodynamics, inertia moment minimization, and enhanced engine performance to the 2.0-liter boxer engine.

STI will provide technical support to SRT USA again this year as they compete in the Global Rallycross Championships. It hasn’t been announced, but Bucky Lasek and Sverre Isachsen should be piloting the Subaru WRX STI GRC cars again this season. It was just announced that Lasek will also be driving SRT USA’s rally car for the first Rally America Sno*Drift rally later this month.

STI is offering technical support in engine development and other areas that come from the Nurburgring and SUPER GT races cars. The new 2016 Subaru WRX STI GRC cars will be lighter, get improved rigidity and inertia moment optimization. Last year, the drivers struggled and the cars experienced a multitude of mechanical issues. The STI GRC cars have received improvements over last year’s cars and will get engine enhancements that Subaru says will prioritize reliability. Can Subaru compete with Ford and Volkswagen this year? Stay tuned.