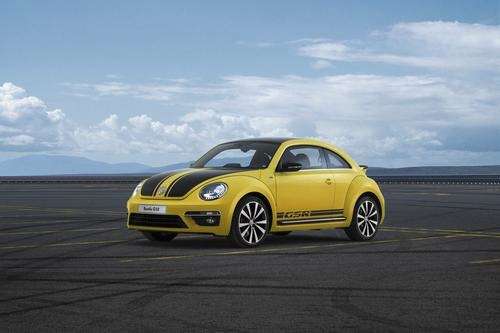 Volkswagen is shaking things up with new turbocharged engines for the 2014 Jetta, Beetle and Passat and a sporty new 2014 Beetle GSR that is faster and more fuel-efficient.
Advertisement

If you are thinking about purchasing a new 2014 Volkswagen, there are big changes coming for the 2014 model year and good news for performance fans. As the German automaker looks to increase fuel mileage in all their vehicles, they will be dumping the old 2.5-liter five cylinder and replacing it with a new 1.8-liter turbo powerplant for the 2014 Beetle, Jetta and Passat. They will also add a new sporty 2014 Beetle GSR special edition to the lineup with a special appearance package. But the biggest news coming out of VW is their new 1.8-liter turbocharged engine.

The introduction of their all-new EA888 direct-injection four-cylinder TSI engine, signals the end of the 2.5-liter five-cylinder naturally aspirated powerplant currently fitted to the Jetta, Beetle, and Passat models. As most automakers are doing, VW is using an efficient turbo engine to increase mileage across their lineup by 16 percent. But they will also improve performance with the new powerplant. They will be able to produce the same power as the outgoing 2.5-liter but with more torque. This will give most VW models better performance than before. The new engine will be built in Silao, Mexico that is part of Volkswagen’s ongoing $5 billion investment in the North American market.

This new engine produces 170 horsepower and 184 pound-feet of torque which is an improvement of seven lb-ft, delivered much lower in the rev range making them quicker off the line. As Volkswagen fazes out the old 2.5-liter over the 2014 model year, 90 percent of VW cars sold in the U.S. will have these highly efficient powerplants. VW says the new turbo engine will offer highway fuel mileage gains of 16 percent in the 2014 Jetta and Passat models and more in the 2014 Beetle.

The 2014 Beetle range gets significant new additions with the most exciting one being the introduction of the retro-themed GSR (German for “Yellow Black Racer”) that will be sold here in the U.S. as a limited-edition model. Even though the old Beetle 2.5 was a turbo, it will also be replaced with the new 170-hp 1.8-liter turbocharged four cylinder during the 2014 model year. Highway fuel economy is predicted to improve by up to 17 percent with the 1.8-liter engine in the Beetle. The previous Beetle Turbo models have been re-branded with the R-Line moniker and will feature new bumpers, badging and optional 19-inch wheels and Bi-Xenon headlights.

Other new models and upgrades to the Volkswagen lineup for 2014 include the Jetta geting a new independent rear suspension. This should improve driving dynamics of the 2014 Jetta to be sportier and more agile in the corners. A new 2014 Touareg R-Line will also be added to the lineup and R-Line will be added to the Tiguan range.

With the addition of the new 1.8-liter turbocharged engine, the whole Volkswagen lineup gets faster and more fuel-efficient. That’s not a bad way to upgrade the 2014 Volkswagen Jetta, Passat and Beetle. And the new 2014 Volkswagen Beetle gets a new limited edition GSR that will also be faster, sportier and with better fuel efficiency. Good job Volkswagen.