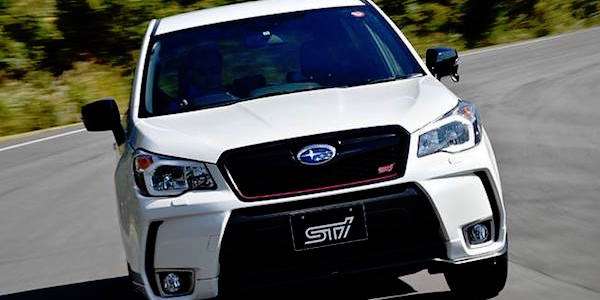 The new 2017 Subaru Forester tS performance SUV is a hot item in Australia. Will it ever see U.S. shores?
Advertisement

The new 2017 Subaru Forester tS special edition is a huge success in Australia and performance enthusiasts are snatching them up fast. They won’t be arriving in Australia showrooms until June, but the range-topping performance model is getting a hot reception from customers who are lining up to get one. Forester enthusiasts in the U.S. can only look and not touch this hot SUV. It won’t be available in North America.

There will only be 300 units shipped down under and Subaru Australia Managing Director, Nick Senior, said he wished they had ordered more. Senior says, “When we flagged Forester tS late last year, the customer enquiries went through the roof and the end result is we’re already wishing we’d ordered more.”

Forester tS is the ultimate version of Subaru’s sporty turbocharged SUV. The new Subaru Forester tS was jointly developed between the Subaru factory and the performance arm, Subaru Tecnica International (STI). The Forester starts out at the Subaru factory in Gunma Japan and then gets shipped to STI for final completion and the addition of around 30 items.

Forester tS gets special equipment underneath that was developed at the Nurburgring along side the WRX STI S207. The performance SUV sits 15mm lower than the regular model and gets a special STI suspension setup and tuning for performance driving dynamics. Underneath it features 19-in BBS aluminum wheels wrapped in 245/45R19 performance tires, 17-in ventilated Brembo disc brakes both front and rear with red STI logo, a track-tested STI-tuned suspension, flexible tower bar, draw stiffeners both front and rear, and a flexible support sub-frame in the rear.

It’s powered by the same 2.0-liter turbocharged boxer engine that’s in the Forester XT producing 177kW/350Nm., It gets a dedicated ECU unit, dedicated TCU transmission control unit and oil cooler for the 8-step CVT automatic. The CVT features an S # mode (Sport) on the SI-DRIVE for performance driving.

Senior thinks the hot performance model will be highly collectible, and with only 300 models available he could be right. He says, “Arguably it is the only true sports SUV under $80,000 (Australian). And with its rarity and Subaru’s renowned retained value, it is bound to be one of the first collectible SUVs.”

Subaru and STI will jointly developing additional future models like the performance Forester tS. He goes on to say, “It certainly gives us great confidence in progressing other joint projects between the factory and STI.”

The new 2017 Subaru Forester tS comes in three exterior colors: Crystal White Pearl, Crystal Black Silica or WR Blue, each with black interior trim. 300 units will begin arriving in Australian showrooms next month and they will likely be pre-sold before they get there. U.S. performance enthusiasts can only look and not touch.