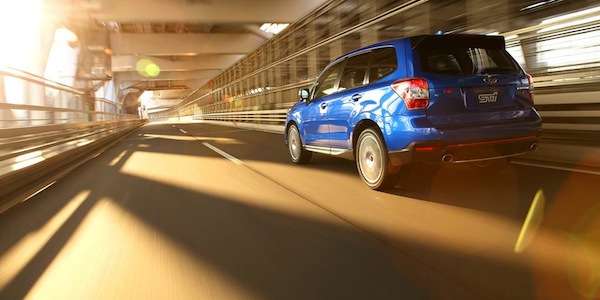 The 2016 Subaru Forester tS is headed to the Australia market for performance enthusiasts. How many will they get?
Advertisement

Subaru Australia will be getting 300 of the range-topping performance 2016 Forester tS models that are tuned by Subaru Tecnica International (STI) according to Motoring.au. The Forester tS was first offered in Japan last year and now gets the nod to join the Forester SUV lineup down under. Subaru will only produce a limited number (600) of the performance Forester’s and Australia will get half according to the report.

What’s special about the Forester tS? Subaru says the new 2016 Forester tS will get around 50 special specification changes over the standard SUV. 30 of those changes are done by STI engineers after the Forester rolls off the line at the Gunma factory in Japan. Forester tS gets special equipment underneath that was developed at the Nurburgring along side the WRX STI.

Forester tS sits 15mm lower than the regular SUV and gets a special STI suspension setup and tuning for performance driving dynamics. Underneath it features 19-in BBS aluminum wheels wrapped in 245/45R19 performance tires, 17-in ventilated Brembo disc brakes both front and rear with red STI logo, a track-tested STI-tuned suspension, flexible tower bar, draw stiffeners both front and rear, a flexible support sub-frame in the rear, dedicated ECU unit, dedicated TCU transmission control unit and oil cooler for the 8-step CVT automatic. The CVT features an S # mode (Sport) on the SI-DRIVE for performance driving. It will be powered by the same 2.0-liter turbocharged boxer engine that’s in the Forester XT producing 177kW/350Nm.

The report says the Australian 2016 Forester tS will be priced around $57,000 (Australian) and will be offered in three colors, Pearl White, World Rally Blue, and Black. Subaru Australia will announce full details and specs closer to the car’s launch date in March. Nick Senior, Subaru Australia boss said the Forester tS is a test case for the Australian market. Senior said, “Forester tS would give STI and us the confidence to look at other special tS cars.” Stay tuned.