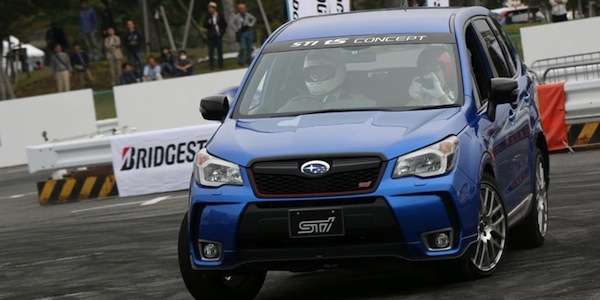 New Subaru Forester STI has Nurburgring roots but don’t look for it in the U.S.

Subaru and Subaru Tecnica International (STI) are launching a new 2015 Forester STI soon. Will we see it in the U.S., Australia and Europe?
Advertisement

The New 2015 Subaru Forester STI is coming soon, but will we see it here in the U.S. market? Subaru revealed the new Subaru Forester tS Concept at an event in Japan which is a good indication this will be a Japan-only performance Forester STI. Here’s what we know about the development of the new tS Concept that Subaru teased in Japan at the Japan Motorsport Festival back in October.

The Forester tS Concept that was the forerunner of the new Forester STI was developed at the Nurburgring just like STI did with the new-generation 2015 WRX STI. STI and Subaru have been testing cars at the Nurburgring Northern Loop and using it for research-and-development for decades. Subaru was one of the first automakers to use the famous course because it replicates real-world road conditions and is ideal for testing a high-performance sports car like the 2015 WRX STI. The Forester tS Concept received the same testing in Germany.

Subaru has used Nurburgring since 1992

Subaru tested the first-generation Impreza at Nurburgring in 1992, because they wanted to produce a sports sedan that could handle the extremes of racing at Nurburgring and also improve the drivability and safety levels of a production vehicle. Today, Subaru along with other automakers, find the Nurburgring to be an ideal place to test their new cars, and several research-and-development workshops populate the course.

This is where the new 2015 Subaru Forester STI was developed along with the STI team that ran the 2015 WRX STI NBR race car. The STI team along with Fuji Heavy Industry (FHI) engineers had to figure out how to make 19-inch wheels and wider tires work with the suspension specs for optimal ride quality. Because the Forester SUV sits much higher than the WRX STI, they needed to adjust the suspension to get the optimal driving performance and a high-quality ride for the customer.

It looks like the new Forster STI will be getting a new 8-step CVT automatic transmission. FHI engineers have been working on the Continuously Variable Transmission for over a year trying to tune the cross-ratio of the S mode so it works well mated to the turbo boxer engine in the Forester STI. Subaru will be using a CVT in the performance Forester to meet new fuel mileage regulations.

The new Forester STI will likely get the same 2.0-liter turbocharged engine that comes in the new Japan-only 2015 WRX S4. The S4 is equipped with a high performance 2.0-liter direct injection turbo "DIT" boxer engine and was perfected in Subaru’s motorsport involvement. It produces 221 kW (296 hp) and 400 Nm (295 lb ft of torque). Subaru says it will achieve 31 mpg in the JC08 mode Japanese cycle test.

The new 2015 Subaru Forester STI received its research and development at the Nurburgring just like the 2015 WRX STI. But unlike the new-generation WRX STI, the new Forester STI will likely be a Japan-only vehicle and won’t be shipped to the U.S., Australia and European markets. Stay tuned to Torque News as the new Forster STI will be officially revealed on November 25.