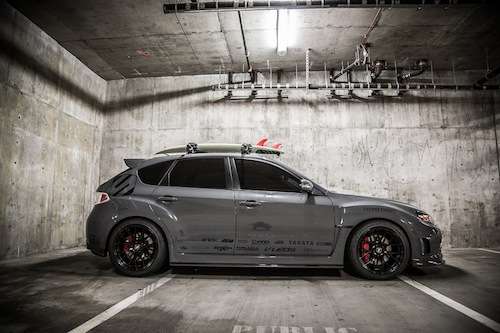 California tuner John Pangilinan took the Scosche x Alpinestars Subaru STI and turned it into a build unlike any other.
Advertisement

When Scosche Electronics wanted to re-vamp their existing Subaru STI show car, they called John Pangilinan to take on the project. They told him they needed it done it time to take to the 2012 SEMA Show in Las Vegas. As with any project that has a deadline, there are always challenges, but the project was finished on time and he delivered in a big way. John Pangilinan, know as “John P” in the tuner community, took the Subaru STI show car and transformed it into a brand new vehicle.

The project begins on the drawing board

John P started by consulting with his close friend and automotive illustrator-extraordinaire, Jon Sibal. He then partnered with Alpinestars to bring in a true motorsports feel. John was excited about the project from the beginning and couldn’t wait to get started. "The Scosche / Alpinestars Subaru STI has been one of my favorite builds to date. My goal for the project was to create a functional vehicle that was inspired by the lifestyle of the two brands, while showcasing the product authentically."

On the outside, the Scosche x Alpinestars Subaru STI gets a BASF Grigio Telesto charcoal grey exterior finish “to give it a bit of an urban feel and stealth look.” The exterior treatments also include matte black Enkei Raijin wheels that are wrapped in Toyo Tires. No build would be complete without the stock STI calipers being painted red and the Scosche branding peaking through. The exterior also received a carbon fiber Chargespeed lip kit that adds to the overall sporty feel. The owners are into surfing, and John P added an Inno surf rack with custom rails, a surfboard with red fins and color-matched the gills inside the hood scoop to complete the exterior treatment.

The heart of the build is inside

John says he got his inspiration from designer-edition vehicles that feature matching luggage with the interior. The main cabin design cues on this build come from the Alpinestars Global Luggage collection materials and fabrics. They materials are seen on the Yonaka seats, door panels, rear seats, headliner and trunk. Astars logos, labels, clips / carabiners were installed by Infinite Auto Design to match the look and feel of the luggage collection. New Takata black Drift III street legal harnesses were added to the Yonaka seats along with an MXP titanium shift knob to round out the custom interior.

Based in downtown Long Beach, CA., John Pangilinan has been actively involved within the automotive industry for over 10 years. John P has worked with top companies and manufacturers like Scion and Ford. He has a number of successful concept projects he has built and has been featured in multiple media outlets, marketing materials, and auto shows.

The most recent achievement includes the first-ever Hyundai SEMA President’s Choice award for the 2013 JP Edition Veloster Turbo concept car. Other achievements include Scion Tuner Challenge winner in 2008 and 2nd place in 2010 and Ford design achievement award at SEMA 2011.

LG's New EV Battery Plant Is a Welcome News for Tesla
Tesla Giga Berlin's New Hurdle: It's Not Only the Gov't, but Now Tesla Itself
END_OF_DOCUMENT_TOKEN_TO_BE_REPLACED