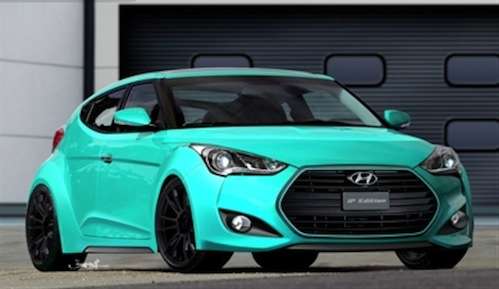 The California tuner worked with paint supplier BASF to come up with the brilliant mint green exterior finish that attracted much attention from attendees at the show. The BASF mint green exterior finish was applied by Auto Explosion in Gardena, CA. The JP Edition Veloster Turbo also gets a number of other exterior treatments like wide fender flares and a blacked-out wheel package. The TS Designs metal fender flares were designed by Jon Sibal.

Underneath the JP Edition 2013 Veloster Turbo

Underneath that brilliant mint green finish, the JP Edition is powered by a 1.6-liter, direct-injected Veloster Turbo engine that receives an ARK performance exhaust. The suspension gets enhanced by adding KW coilovers, Whiteline sway bars and anti-lift kit, and a Brembo big brake kit. The Veloster concept rides on blacked-out Ray’s Gram Lights 19-inch Xtreme57 Wheels and wrapped with Toyo Proxes T1 Sport tires to finish out the sporty theme.

Based in downtown Long Beach, CA., John Pangilinan has been actively involved within the automotive industry for over 10 years. John P has worked with top companies and manufacturers like Scion and Ford. He has a number of successful concept projects he has built and has been featured in multiple media outlets, marketing materials, and auto shows.

A few recent achievements include Scion Tuner Challenge winner in 2008 and 2nd place in 2010 and Ford design achievement award at SEMA 2011. He also just finished the Scosche x Alpinestars Subaru STI project car. The vehicle made its debut at SEMA within the Scosche booth and will be shown again in their Consumer Electronics Show booth in January.

John P. will receive an honorary plaque for the award, as well as a $5,000 honorarium for his efforts with this JP Edition 2013 Hyundai Veloster Turbo concept. Look for more good things from the California tuner in the future.