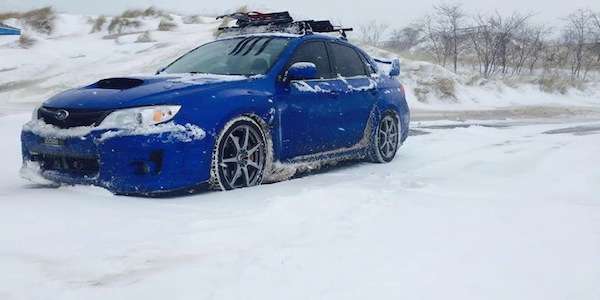 Subaru took the 2015 WRX STI to the slopes and gave fans a demonstration of the STI’s all-wheel-drive capabilities in the deep snow on a ski slope.
Advertisement

You won’t find Subaru WRX STIs sitting in the garage waiting for warmer weather or dry roads. Put a set of winter Blizzak tires on any Subaru and you have a vehicle that will go anywhere in the snow. Driving a WRX STI performance car is the ultimate on the fun-to-drive meter in the snow. While most STI owners bump up the power, the 305hp on a stock STI is more than enough to get you in some serious deep stuff including the snow.

Living in Colorado’s snow country, permits us to see every kind of winter driving condition. Snow, ice, and frozen roads present dangerous driving conditions, and if you venture out without the right tires, even a Subaru all-wheel-drive vehicle will get stuck. We’ve seen Subarus on the side of I-70 heading into the high country in deep snow sliding off the road. There is one Subaru owner where I live who is stuck all the time because he drives on all-season tires all winter.

Just because you have AWD, doesn’t mean you will get to your winter destination safely. Informed drivers know that a front drive or even a rear-wheel drive car with good snow tires will outperform an all-wheel-drive car with all-season tires in the snow. Slap some great dedicated snow and ice tires on a rusted out Chevy Chevette and you’ll run circles around a 4X4 with all-seasons.

Snow tires arm any vehicle for the worst conditions

Snow tires are specially engineered with unique tread patterns, deeper tread depth, and snow and ice technologies that will arm any vehicle for the worst conditions. Tire companies use a special compound in their winter tires that removes a thin layer of surface water to improve grip on snow and ice. This compound also allows the tire to remain flexible in freezing temperatures, improving traction and available grip. High sipe density of snow tires improves traction in the wet, snow, and ice by increasing the number of biting edges.

CHECK OUT: Subaru XV Crosstrek vs. UPS truck in the snow: Who wins? [video]

The 2015 Subaru WRX STI comes standard with 245/40 R18 97W summer-performance tires which are great for dry roads. Take those summer tires out in the snow and ice, and you’ll be stuck in a heartbeat. Wrap a set of Blizzak tires around those WRX STI BBS alloy wheels and the standard Subaru Symmetrical all-wheel-drive system will perform better than any other performance car on the planet on snow and ice.

Most STI drivers know this and get another set of wheels they can use with winter tires and then swap them out in the fall. When the temperature drops and winter driving conditions are at their worst, that’s when STI owners with the right tires are looking at the opportunity for a snow day. Driving a 2015 Subaru WRX STI with snow tires in the winter pegs the fun-to-drive meter.

mattew wrote on March 9, 2015 - 1:35pm Permalink
"rusted out" and "chevette" - isn't that redundant?
Parks McCants wrote on March 10, 2015 - 1:56am Permalink
We have a WRZ in the Family. My son Jacob scares the shiiiit out of the old man when sitting shot gun. His is pumped up to 350=horsepower and 400+ on the torque side. Much of this is accomplished through forced air and fuel( over-sized injectors and squirrel cage with 4 inch exhaust and changeable baffled resonators. ( Loud as hell when taken out.) His runs wide open( no inhibitor or rev limiter, and often makes runs up to Idaho from Northern California in the winter. He's paid the price for speed with a transmission rebuild and a handful of axle replacements. None the less, when the old Honda man talks about how fast a Civic Si is, Jacob just grins a bit. Like you, he runs without chains on studded tires under all conditions with a top rack and trunk. Seems to go just about anywhere. His 2010 WRX just flipped the o.d. at 100,000 K hard-driven miles.The pancake is bullet proof as well as most drive components. One hell of a car! Dudes a mechanic, knows how to fix it!

LG's New EV Battery Plant Is a Welcome News for Tesla
Tesla Giga Berlin's New Hurdle: It's Not Only the Gov't, but Now Tesla Itself
END_OF_DOCUMENT_TOKEN_TO_BE_REPLACED