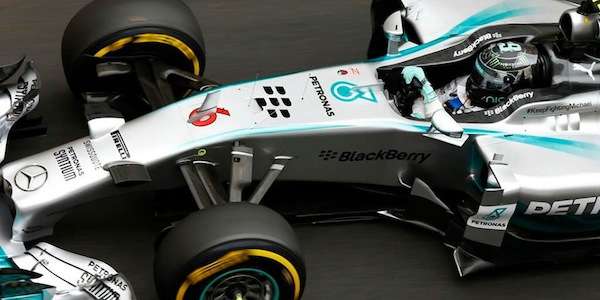 Rosberg and Hamilton do it again at 2014 Monaco Grand Prix

Nico Rosberg and Lewis Hamilton looked unbeatable again yesterday at the 2014 Monaco Grand Prix. This was Nico’s second consecutive Monaco Grand Prix victory and he’s the first driver to do so since Ayrton Senna. Hamilton who had just returned from Barbados for the Global Rallycross pre-race event with Ken Block, finished in second place, securing the team’s fifth consecutive one-two finish in the incredible 2014 season.

The Mercedes AMG Petronas team has now taken five consecutive one-two finishes. This is just the third time a team has achieved this in F1 history. This 2014 Monaco Grand Prix victory marked the team’s 10th victory in the new era of the Silver Arrows since 2010.

Nico Rosberg was at home in front of his family which made it even more special for the Mercedes AMG Petronas driver. He said after the race, “It was a tough race out there today but I am absolutely delighted to have won my second Monaco Grand Prix in succession. It’s an amazing feeling and I’m proud to have done it at home, in front of my family and friends who were all here this afternoon. The race started well and I was comfortable but then we had to manage my fuel consumption and Lewis was pushing really hard behind me. We were able to be in control of the fuel with a few laps of lift and coast. It was important for me to break Lewis’ momentum of winning the last four races this weekend. That worked out very well, but it was a really tough weekend. I’m so happy for the team that we had another one-two finish and look forward to the party tonight!”

Lewis Hamilton recognizes it’s a team effort and the two drivers have great cars. He said after the race, “I felt very strong out there today and I really drove with all my heart, giving everything that I could to improve my position. This just hasn’t been my weekend but I can leave today feeling happy that we have achieved another one-two finish for the team. We have such a great car and everyone who has worked on it deserves the incredible results that we are getting at the moment. Back to this afternoon, this is such a difficult circuit to overtake. I was following Nico as close as I could and had great pace but I just couldn’t get past. Towards the end, I got some dirt in my eye through the visor which made it very tough for a few laps but thankfully it cleared up and I was able to hold off Daniel and keep second place. This hasn’t been the greatest of weekends but I’ll go into the next race with even more energy and determination. The team are working so hard and we’re determined to keep the momentum going.”