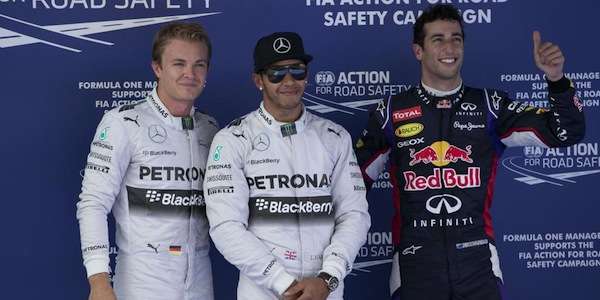 Mercedes AMG Petronas pulled off another one-two finish at the Spanish Grand Prix. What other achievements did they accomplish?
Advertisement

What other achievements did they accomplish this weekend at the Spanish Grand Prix? It was a weekend of achievements for the team as they stood on the podium again in Spain. Lewis Hamilton achieved his fourth victory of the season today with Nico Rosberg finishing just 0.636 seconds behind in second place.

The two Mercedes AMG Petronas drivers are pulling off these results race after race. The drivers are closely matched and the cars are ahead of the field in technology. Will anyone be able to catch these two?

Lewis and Nico both pulled off great performances and the gap of 0.6 seconds after 66 laps of flat out racing sums up a great day of racing for the team. Lewis Hamilton said, “It’s fantastic to get my first win here after eight attempts and it’s really difficult to put that feeling into words right now. We have our bosses from Mercedes-Benz here today and it’s great for the team that we were able to give them a one-two finish.”

Both drivers are aware that this is a unique time for the team. Lewis went on to say, “In all my career, I’ve never before had a car or a performance gap like this. I’m just so proud of this team: we are looking very strong and I’m enjoying every moment and every step of the way. There’s still a long way to go this season, though, so we are staying humble, getting our heads down and working hard. It’s a great feeling to be leading the championship.”

Next up is Monaco which is Nico’s home. Nico said after the race, “It’s not only my home race but has some great memories from my victory there last year. It was another great race for the Mercedes AMG Petronas team as Lewis Hamilton and Nico Rosberg pulled off another one-two finish at the Spanish Grand Prix.