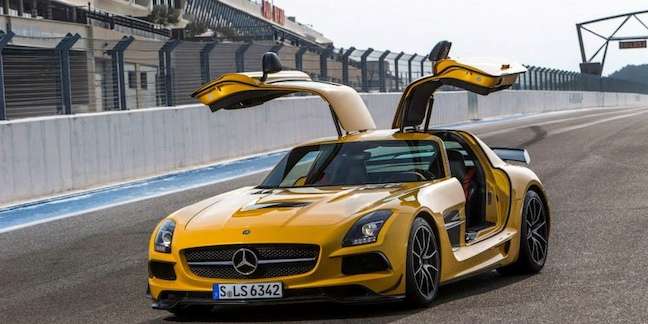 From the all-new 2014 Mercedes-Benz CLA-Class to the 2014 SLS AMG Black Series, the Mercedes-AMG Petronas Formula 1 team racing technology improves the breed, and the car you drive.
Advertisement

You think racing is just about watching wrecks or standing on the podium spraying Champaign as a winner? Mercedes-Benz races F1 cars to win, but much of what happens on the track gets transferred to cars we drive everyday. Even if you aren’t into motorsports, what happens on the track is vitally important to the technology that goes into improving the everyday car. The Mercedes-AMG Petronas Formula 1 team came to Austin, Texas for the United States Grand Prix on November 17. But the Mercedes-AMG team was there not just to win, but to improve the technology that goes into the Mercedes-Benz in the garage.

You might say, I will never drive a Mercedes automobile. Even so, Mercedes doesn’t operate in a vacuum and much of the technology Mercedes develops will eventually be adopted by other automakers. Here are five ways Mercedes involvement in international motorsports have made every Mercedes-Benz even better than the last, and will likely end up in the car you drive. Look for this technology to be sitting in your driveway in the future, and some of it may be already.

It starts with the body. Mercedes tells us that 85% of a Formula 1 car is made of carbon fiber. Its fundamental to racing success because of the weight factor. With automakers trying to reduce car weights because it also reduces fuel consumption, its a vital component for future cars. Mercedes is gaining ever more expertise in bringing costs down and standardizing carbon fiber production for road cars. It already appeared in the SLR back in 2004 and can be found today in the SLS AMG Black Series pictured above.

Mercedes found out how to engineer a cylinder deactivation system after first
developing a system for their 750-hp Formula 1 V-8 engines. They used what we learned to create road-going AMG Cylinder Management. It made its debut on the SLK55 AMG, it shuts off half the car’s eight cylinders under light loads for better fuel economy. But “springs to life” when you put the hammer down.

Mercedes learns much from producing the 750 hp F1 W04's 2.4-liter engine. They can whip up an amazing 19,000 rpm. Mercedes takes that technology and transfered it to the 1990 190 E Evo II that produced 235-hp from its 2.5-liter four-cylinder powerplant. It was one of the hottest four-cylinder engines in the world at that time. Today we see the same technology that produces the world’s most powerful four-cylinder in the 2014 CLA45 AMG. It develops 355 turbocharged horsepower from just two liters. It comes as a direct result of years of racing expertise.

Any performance fan knows how important the chassis and suspension is to a cars driving dynamics. Underbody aerodynamics made their F1 cars not only faster, but also more fuel efficient which is critical in racing since they can’t refuel. The CLA-Class takes a page directly from this racing technology. The new CLA comes with an aerodynamically optimized muffler and rear diffuser, both examples of aero engineering developed and refined on the race track.

How did Mercedes learn to build the batteries powering the SLS AMG Electric Drive? Yep, you guessed right, it was on the track. Their Formula 1 cars are equipped with something called KERS—an acronym for kinetic energy recovery system which requires high capacity batteries that can be rapidly charged and discharged. It now resides in the SLS Electric Drive, the world’s fastest electrically powered series production vehicle.

You may never buy a Mercedes automobile, but the technology developed by Mercedes-AMG that we see in the 2014 CLA-Class and 2014 SLS AMG Black Series, will likely find its way to the car sitting in your driveway in the future.