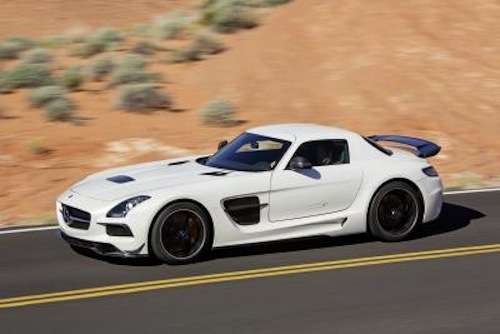 The new 2014 Mercedes-Benz SLS AMG Coupe Black Series high-end supercar is the fifth Black Series model from Mercedes-AMG and is the most extreme version yet.
Advertisement

When Mercedes-Benz unveiled the all-new 2014 SLS AMG Coupé Black Series late last year in LA it definitely had the auto world buzzing with excitement. The highly-anticipated new supercar is the fifth Black Series model from Mercedes-AMG and boasts an intoxicating design, power and driving dynamics. Ola Källenius, Chairman of Mercedes-AMG GmbH gives us a little more insight into the new super sports car in a new press release from the performance division of the German automaker.

From motorsport to the road

Källenius tells us that this new SLS AMG Black Series takes 100 percent of its inspiration directly from the race track version SLS AMG GT3. Most road-going high-performance models built by different automakers use the racing technology and it filters down to the factory cars. But ever ounce of racing technology went into the new SLS AMG Black Series Coupe. And when we look at the technology, it shows up in a powerful way.

It also features a lightweight construction in accordance with the "AMG Lightweight Performance" strategy. The ultra-performance 2014 Mercedes SLS AMG Black Series is the most extreme version of the SLS model in the companies history and offers the ultimate in performance. It starts with ultra light-weight components that enables the supercar to achieve a power/weight ratio of 5.49 lb/hp.

The 2014 Mercedes-Benz SLS AMG Black Series has a curb weight of 3,417 pounds. The AMG 6.3-liter V8 engine is hand-built by one tech in the AMG factory. And it generates neck-snapping power with an output of 622 horsepower and 468 lb-ft of torque. The AMG Black Series accelerates from 0-60 mph in just 3.5 seconds with a top speed of 196 mph. The car is definitely intoxicating for anyone lucky enough to own or drive one and is the fastest SLS of all time.

There are only a few supercars on the planet with the kind of extreme performance that the SLS AMG Coupé Black Series produces. And those who love performance and driving dynamics will appreciate everthing that went into the newest AMG Black Series.

Tobias Moers, Head of Overall Vehicle Development and member of the Management Board of Mercedes-AMG GmbH tells us, "The most dynamic road-going gullwing model of all time goes by the name of the SLS AMG Coupé Black Series. Fans of high-performance super sports cars will be thrilled by its high-tech package. Its stirring performance and supreme driving dynamics are underpinned by the numerous new developments that have been incorporated into the engine, power transmission, suspension and aerodynamics, but also by us giving top priority to our "AMG Lightweight Performance" strategy."

For those lucky enough to get behind the wheel of the supercar, they will experience a whole new level of emotion. Mercedes says the market launch of the 2014 Mercedes-Benz SLS AMG Coupe Black Series will commence in June 2013. The price in Germany will be 249,900 euros, $324,795 U.S. We can only dream about how intoxicating it would be to own one.