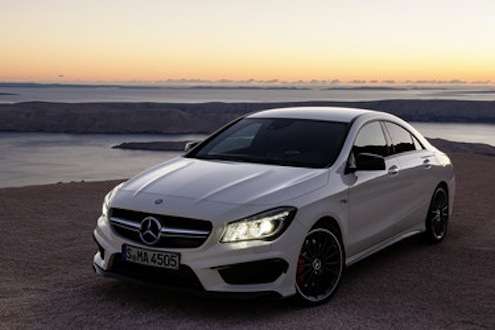 The 2014 Mercedes-Benz CLA45 AMG made its world debut at the New York Auto Show and comes with the most powerful production four-cylinder engine on the planet.
Advertisement

Mercedes-Benz has just unveiled the all-new 2014 CLA45 AMG in New York as the new four-door coupe makes its world premiere. Mercedes-Benz AMG has designed the CLA45 AMG to be a driving enthusiasts car and has infused the new CLA with the most powerful production four-cylinder powerplant on the planet. The four-door coupe looks a lot like the successful CLS63 AMG, which has been the trendsetter for four-door high-performance coupes. The performance CLA45 AMG will also feature a new variant of the 4MATIC. For the performance enthusiast, it doesn't get any better than this. How does Mercedes AMG do it again with the new mid-range CLA-Class?

The new 2014 CLA45 AMG comes equipped with an AMG four-cylinder engine that pumps out 355 hp and 332 lb.-ft. of torque. This gives the new performance four-door coupe the world's most powerful four-cylinder engine built in series production. The CLA establishes a new segment for the German automaker and they expect to attract a new generation of performance enthusiasts with the car. The AMG power and torque give the CLA45 AMG superb driving performance. The powerful coupe sprints from 0-60 in 4.5 seconds with an electronically limited top speed of 155 mph. That will excite even the most ardent performance fan.

A mid-range compact with AMG performance

Leave it up to AMG to come up with a mid-range compact with the top model CLA45 AMG to excite the senses. Ola Källenius, CEO of Mercedes-AMG GmbH: "In the CLA45 AMG, Mercedes-AMG presents a unique and absolutely desirable automobile with the characteristic AMG genes. The high-tech package with the world's most powerful four-cylinder production engine and performance-oriented AMG 4MATIC all-wheel drive stands for 'Driving Performance' at its best."

The new CLA45 AMG features some exciting new performance technology. The small displacement 2.0-liter AMG engine acts much bigger than anyone would expect and gets a twin-scroll turbocharger, an AMG performance exhaust system, and a high-performance cooling system. Each AMG engine is hand built by one tech on an exclusive assembly line. Each engine bears the name of the responsible mechanic that builds the AMG powerplant. The 2.0-liter engine is mated to an AMG Speedshift DCT seven-speed sports automatic that transfers the power to all four-wheels.

The CLA 45 AMG comes equipped as standard with the fully variable, performance-oriented AMG 4MATIC all-wheel-drive system. The CLA 45 AMG with 4MATIC will have a power take-off to the rear axle. The new unit will be integrated with an electrohydraulically controlled multi-disc clutch that will allow fully variable distribution of the drive torque between front and rear axle. A big benefit of the new design lowers the weight of the 4MATIC making it more fuel-efficient.

This special feature is designed to enhance dynamic performance and driving pleasure and is called the Mercedes "Momentary M" program. In C and S mode, this enables the driver to activate manual mode ("M") without having to remove a hand from the steering wheel by pressing the "up" or "down" shift paddle once. In "Momentary M" mode, the driver experiences the dynamics and performance in all automatic driving programs, with automatic upshifts upon reaching the rev limit. This allows the driver to devote his full attention to the vehicle's impressive performance.

The 2014 Mercedes-Benz CLA45 AMG offers driving performance in a new mid-range compact segment at its very best. The new four-door coupe can be ordered this spring with first U.S. deliveries beginning in November 2013. Pricing for the CLA45 AMG has been announced and will start at $47,450. Mercedes should attract a new generation of performance buyers with the new CLA-Class.