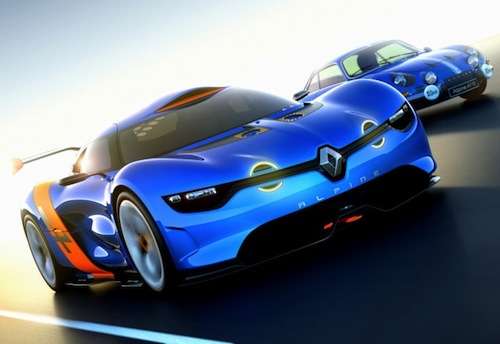 Renault is celebrating 50 years of the Alpine Berlinette by creating a concept car named 2012 Renault A110-50 concept.
Advertisement

“Developing this concept car was a great adventure. It was a catalyst for creativity. We wanted to make a Berlinette that was of our time, and which boldly embodies Renault’s passion for motorsport. We were guided by our hearts and emotions.” Axel Breun, Concept and Show Car Director.

“For everybody on the team, it was a dream come true to work on an Alpine concept car. We wanted to put this car firmly in the modern day, while resonating with its heritage” Laurens van den Acker, Senior VP, Corporate Design.

The concept whose official title is the 2012 Renault Alpine A110-50 Concept, made its debut in Monte Carlo in the lead up to the 2012 Formula 1 Monaco Grand Prix. It is based on the 2010 Renault DeZir Concept and could be used to gauge interest in developing a production sports car that would be developed by the French automaker at a future date. No statement was made today to confirm or deny that could happen.

Outside, the front-end of the concept car features Renault’s new look with the upright diamond with bodywork styling that still reflects hints of the original A110. The car sits low and wide and the new Alpine A110-50 features proud fender arches, a wild split-wing rear spoiler and scissor doors. The new supercar wears a lightweight body crafted from carbon fiber and dipped in a shade of the iconic Alpine Blue used on the original cars. “The car is very curvy, like the Berlinette, while expressing the three key words of our new design policy: simple, sensual and friendly” Axel Breun.

Good looks with power to match

Renault engineers were able to create a concept that not only looks good but should be an incredible performer as well. Power comes from a mid-engine 3.5-liter V-6 engine rated at 400 horsepower and 311 pound-feet of torque. The power is sent to the rear wheels by a dual-clutch six-speed gearbox that allows the driver the choice of disengaging the transmission via a floor-mounted clutch pedal or shifting via steering-wheel mounted paddles.

The Renault Alpine A110-50 Concept is a race car at heart and features 21-inch wheels with massive 356mm-diameter steel disc brakes on the front and 330mm in the rear to give the suprcar some serious stopping power. Other components of the chassis include Sachs adjustable dampers, a limited-slip differential and an ECU supplied by Magneti-Marelli. The final weight distribution is almost ideal, with 47.8% over the front wheels.

Inside, the two-seater features a race car theme with lots of exposed carbon fiber, a roll cage, special embroidered ‘Renault Alpine A110-50’ badging on the driver’s seat and Sabelt harness belts. The Renault Design-created steering wheel incorporates a colour screen and houses the same technology as a Formula Renault 3.5 single-seater to provide drivers accurate information.

If Renault does decide to launch a production sports car, the Renault Alpine A110-50 Concept will be a great platform to build one.

Nicolas Zart wrote on May 25, 2012 - 6:36pm Permalink
I remember the first time I saw the original A110. I was 6 years old and one pulled up in front of our school. It was surreal! I've longed to own one and still can't shake the idea that the A110-50 would make for a terrific PHEV or even a pure EV.