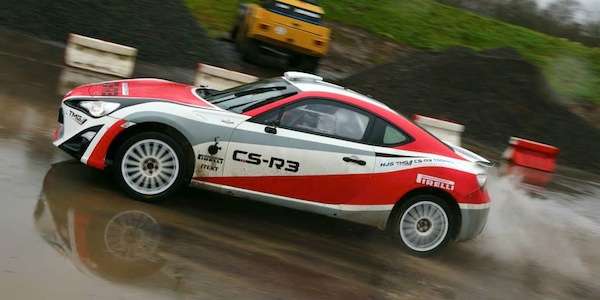 Toyota Motorsport has released details on the Toyota GT86 CS-R3. Why is the debut delayed?
Advertisement

Toyota Motorsport GmbH (TMG) confirmed the final details of the rear-wheel-drive GT86 CS-R3 rally car, and its competitive debut is being delayed until May. The rally car was supposed to ready for its debut in the first quarter of 2015, but TMG says they ran into a few challenges to get the kit for the sports coupe ready for customers. The regulations that need to be met for WRC are written for front-drive cars and the GT86 sports coupe is of course rear-drive. Check out the first onboard test video.

The GT86 has undergone extensive testing in Germany in order to get it ready for competition. The Toyota GT86 CS-R3 will be offered for sale to private customers and Toyota dealerships in the global markets where GT86 is sold. Nico Ehlert, TMG Principal Engineer Customer Motorsport said, “It is extremely important to TMG that our cars live up to our customers’ high expectation so we have taken a little more time than originally predicted to complete the homologation process.”

TMG released pricing on the rally-ready sports coupe and it won’t be cheap. Because of the launch delay, TMG says they will extend its introductory discount. The CS-R3 kit, in either tarmac or gravel specification, costs 79,000 Euros ($89,424 US) (excluding VAT) for orders made before April 24, 2015 representing a 5,000 Euro discount on the standard retail price of 84,000 Euros ($95,022 US).

The CS-R3 comes in a kit and buyers will need to assemble the car themselves. The rally car kit includes the GT86 body shell, powertrain and all mechanical components required to build the car. The kit does not include seats, harness, fire extinguishers, battery, tools, rally computer or wheels and tires. Rally racers will also have to provide their own mudflaps, side protection and diff cover to their car.

TMG had originally targeted the GT86 CS-R3’s 2.0-liter boxer engine to develop 240-250 hp. Now TMG says the final specs on the rally car will be 238PS (234 hp). GT86 CS-R3 has to conform to the FIA’s R3 regulation, which does allow modifications of its 200 hp 2.0-liter Subaru boxer engine. Changes to the software and hardware, such as cam lift and compression ratio, were all part of the development program.

The engine will be mated to a sequential shift six-speed transmission and limited slip rear differential. Inside it’s fitted with an FIA-homologated safety cage designed for weight optimization. The rear-drive sports coupe will also come with a racing clutch, lightweight flywheel and JTEKT hydraulic power steering with short ratio.

TMG says homologation to FIA R3 regulations will be certified at the beginning of July, after which all Toyota GT86 CS-R3 cars will be eligible for national and international rallies, up to and including the World Rally Championship. If you want to go rally racing, and have the money, the new GT86 CS-R3 will be ready for its launch in May in markets where GT86 is sold.