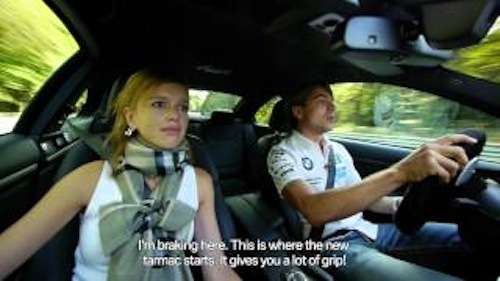 Professional BMW race driver Augusto Farfus scares his wife in a BMW M3 Coupe while taking her on a fast lap around the Nurburgring Nordschleife.
Advertisement

Liri Farfus wanted to experience what her husband does on a daily basis and agreed to go along as he test drove a BMW M3 Coupe. Professional BMW race driver Augusto Farfus thought he was driving slow, but as it turned out, the lap around the Nurburgring Nordschleife was a bit too fast for his young wife. The hilarious video below shows what a good driver Augusto really is. The BMW test driver not only navigates the course and other cars at high speed, but he does it while his wife is telling him that he is “driving way too fast!” the whole time.

Most guys can relate if they tend to drive a little bit fast with their wives or girlfriends in the car. How many of us have heard, “your’e scaring me, you need to slow down!” That is exactly what Augusto heard the whole 2.5 miles around the Nurburgring. Actually he heard a lot more as he test drove the BMW M3 sports car.

Just some of the reactions from his wife and Augusto’s responses are classic. Liri calls him by his pet name, Ninho, as she continually says things like, “you promised you’d drive slowly!” Augusto responded, “I’m driving very slowly honey. There’s a MINI behind us, he wants to overtake, but we won’t let that happen!” His wife comes back with, “No, Ninho, I’m scared! Ninho, I’m really afraid. You promised that you would drive slowly.” “But I am driving slowly, normally I drive much faster! I’m driving very sensibly.”

Augusto (Ninho) gets the BMW up to 155 mph on the straight away and Liri about comes unglued. “Ninho, you are driving way too fast!” Augusto needs to navigate traffic and passes a Mercedes as he speeds up. “Ninho, I’m frightened! I think I’m going to die!” Instead of slowing down, Augusto does what any good test driver would do. He overtakes and passes a Porsche and two motorcycles on the famous race course.

Augusto knows what he is doing and knows the Nurburgring Nordschleife like the back of his hand. In fact he knows it better than his young bride. Liri at one point looks like she is about to throw up and says, “I’m going to be sick in a minute.” He calmly tells her to just look forward and she’ll be ok.

Augusto finishes the last stretch of the course and speeds up to 168 mph. Amazingly his wife survives and she even gives him a high five at the end. Watch the funny video of Ninho and Liri below.

“A hell of a ride: Liri Farfus gets a taste of the Nordschleife.”