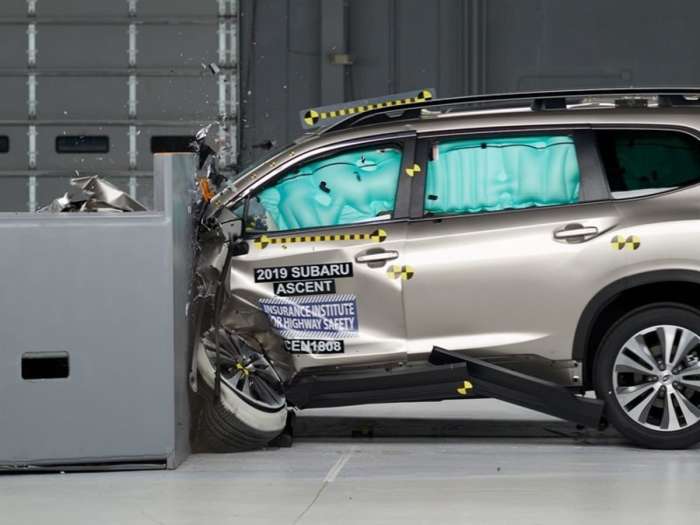 New 2019 Subaru Ascent was awarded Top Safety Pick+ (TSP+) designation from IIHS. It should be no surprise, right?
Advertisement

If Subaru’s goal is to become the overall safety leader in the auto industry, they needed the all-new 2019 Subaru Ascent family hauler to show up big. They succeeded because the largest vehicle they’ve ever built just earned the highest possible ratings from Insurance Institute for Highway Safety (IIHS) in all crashworthiness and front crash prevention categories.

It should be no surprise Ascent gets the highest safety rating because Subaru touts safety as being one of their core values. The Japanese automaker has six other TSP+ award-winners, including the Impreza sedan and five-door compact, Legacy sedan, WRX performance car, Crosstrek small SUV, Outback wagon when equipped with EyeSight and specific headlights. The brand can now boast they have seven with Ascent.

The Subaru Ascent all-wheel-drive vehicle tops out in safety getting Top Safety Pick+ (TSP+) designation from IIHS when equipped with available steering-responsive LED headlights. According to the most recent crash tests, Ascent earned “Good” ratings (the highest possible) in all six crashworthiness tests conducted by the IIHS.

It’s built into the cabin

Ascent rides on the new Subaru Global Platform (SGP) architecture integrating the brand’s ring-shaped reinforcement frame, which protects the vehicle's occupants in a collision. Subaru uses it on every vehicle in their stable of all-wheel-drive vehicles.