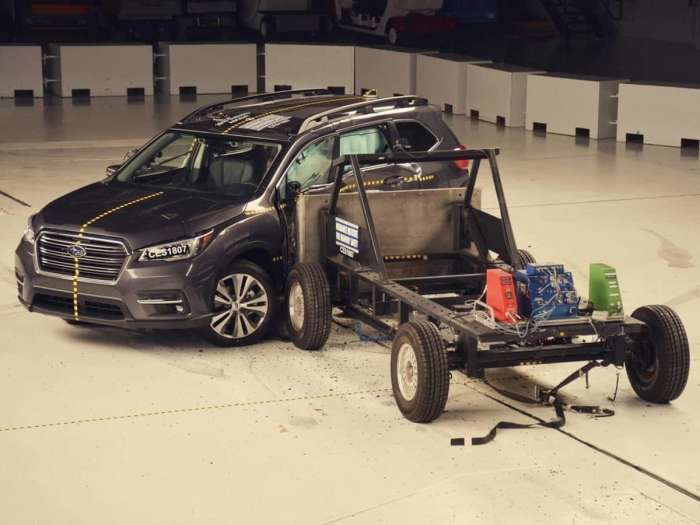 The new 2019 Subaru Ascent gets hit hard in the IIHS side impact crash test. How will the new family hauler perform when the results are released?
Advertisement

One of the scariest crash scenarios would be getting hit with a full-on body blow to the driver’s side door, and it could be fatal to the driver. It’s why crash tests are conducted, to see how well a car performs in real-life crash situations. Subaru Canada was able to go to the very first 2019 Subaru Ascent 3-Row crash test conducted by the Insurance Institute for Highway Safety (IIHS). They saw the new Ascent family hauler get hit hard in the IIHS side impact crash test.

The results haven’t been released yet, but if Subaru’s impressive track record of top safety picks has anything to do with it, the new Ascent should pass with flying colors. Subaru already has five 2018 TOP SAFETY PICK+ winners with Subaru Impreza compact, Legacy sedan, Outback SUV/Crossover, Crosstrek crossover and Subaru WRX/STI. Subaru also has one 2018 TOP SAFETY PICK winner in the Forester SUV.

Here’s what the Ascent has going for it

The new 3-Row Ascent should perform well in crash tests because of three things: The new Subaru Global Platform (SGP), their EyeSight driver assist system, and new Steering Responsive Headlights. The new architecture underpinning the all-new 2019 Ascent first was introduced on the Impreza compact and Crosstrek crossover. The new SGP improves crash energy absorption by 40 percent over present models keeping occupants safer in the event of a crash. Both Impreza and Crosstrek received the highest marks possible from the latest IIHS 2018 tests.

Evan Lindsey, product planning, Subaru Canada explains why they go beyond normal IIHS testing. “Subaru goes above and beyond in our safety measures and we are proud of it. We perform a worst-case scenario Oblique Crash safety test and extensive rear crash tests including the tailgate that is not part of any independent test.”

The Ascent’s new SGP architecture also integrates the latest version of Subaru’s ring-shaped reinforcement frame, which protects the vehicle's occupants in a collision. It’s been used over two decades on every Subaru vehicles in the lineup. Front-end structural details also help improve safety for pedestrians.

The 2019 Ascent will be the first Subaru to come standard with EyeSight Driver Assist Technology that includes Automatic Pre-Collision Braking, Adaptive Cruise Control, Lane Departure and Sway Warning, Pre-Collision Throttle Management, and new EyeSight Assist Monitor (EAM) which provides a heads-up display of the EyeSight system warnings as well as system status information on the windshield of the vehicle. Ascent Limited and Touring models will also come standard with new Steering Responsive Headlights.

The all-new 2019 Subaru Ascent is being subjected to the same stringent IIHS safety crash tests as all vehicles in America. Look for the 3-Row family hauler to pass the IIHS crash tests with top honors. Stay tuned.