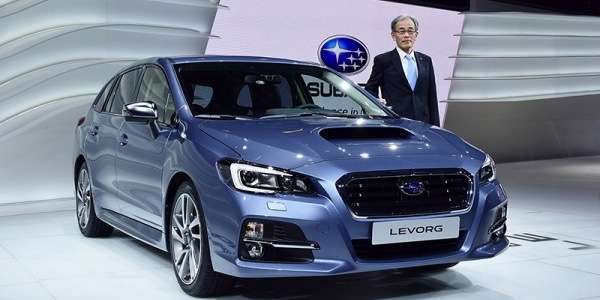 No performance oriented Levorg 2.0 GT-S for the UK market [video]

The 2015 European spec. 2015 Subaru Levorg sports tourer was unveiled in Geneva. The UK won’t be getting the performance Levorg 2.0 GT-S.
Advertisement

When Nobuhiko Murakami, Corporate Senior Vice President Fuji Heavy Industries, unveiled the new European spec. 2015 Subaru Levorg yesterday, it was the standard Levorg sports tourer. Levorg is launching in the UK later this fall with the smaller 1.6-liter direct injection turbo "DIT" engine. According to the announcement by Murakami, the UK won’t be getting the performance Levorg 2.0 GT-S.

The smaller 1.6-liter horizontally-opposed direct injection turbo "DIT" engine is a new powerplant for Subaru and the boxer engine will produce 125kW/250Nm. Subaru is bringing out this new engine first in the Levorg and possibly in other models in the future as they look to increase fuel mileage in their lineup. Levorg will feature a sport-tuned suspension with electric power steering and a smaller sport D-shaped steering wheel with a thick grip. The 1.6-liter sport models will have sport 215/50R17 tires.

In Japan, Levorg 2.0 GT-S also launched with the new 2.0-liter Boxer engine that made its debut in the 2014 Forester XT and now in the 2015 WRX. The 2.0 Levorg engine will also be a horizontally-opposed direct injection turbocharged "DIT" engine. The new 2.0-liter engine produces 221kW (296 hp) and torque that reaches 400N (295 lb ft). It looks like the UK can only look and not touch the performance 2.0 GT-S model.

Levorg, went on sale in Japan in June last year, and has been a huge success. In just seven months it has already achieved sales of 30,000 units in Subaru’s home market. Subaru has chosen Europe as the site for the overseas debut of the Levorg because of strong sales of sports tourers.

MUST READ: Demand is unbelievably high for Subaru Levorg in Japan

FHI boss Nobuhiko Murakami said at the unveiling, “To raise the presence of the Subaru brand, we considered it vital to ensure that the value of the Levorg is recognized in the European market, which is characterized by high-level competition among a large number of automakers.” Murakami did not say if the 2015 Subaru Levorg sports tourer will make its way to Australia or the U.S. Stay tuned.

For more information on the UK Levorg you can sign up here.