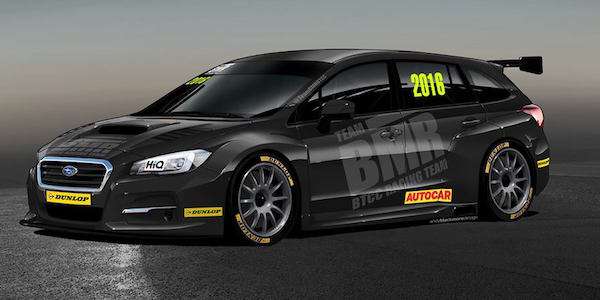 Subaru is writing a new chapter in their motorsport history. It won’t include the Subaru WRX STI performance cars.
Advertisement

It’s a bit strange to be writing about Subaru Motorsports talking about their new rear-drive Levorg race car. Subaru has been known for their all-wheel-drive Impreza WRX STI all-wheel-drive rally cars. It’s what the brand is about and where they created a niche market. Subaru is about to write a new chapter in their motorsports history with the new Levorg sports tourer. This chapter won’t include a WRX STI performance car. It will be their new sports wagon that is only sold in Japan, Europe and Australia. Americans can only look and not touch the Levorg.

We have seen Subaru and Subaru Tecnica International (STI) race the rear-drive BRZ in the SUPER GT Series in Japan with some success. It’s the Levorg sports tourer that will be making a name for itself and advancing Subaru’s name even further beyond the rally stages and Global Rallycross circuit. Subaru is about to embark on a new motorsports series that will be different than anything they’ve ever done. A new rear-drive Levorg is going to be the next Subaru race car developed for the MSA British Touring Car Championship (BTCC).

The new cars are converted from AWD

Subaru has committed to a three-year agreement with Team BMR who will carry the Subaru badge and will run the new Levorg wagon in the series. The regulations call for only rear drive cars so this wagon gets a unique chassis set up that is built from the ground up. Goodwood Road & Racing reports Jason Plato, one of the new drivers for BMR said, “There’s a real sense of anticipation and excitement as the Japanese firm makes its first foray into a high-level circuit racing series.”

The Subaru boxer engine is a key

One of the reasons for the Impreza WRX STI’s rally success is the boxer engine. The Subaru boxer engine is one of the keys, sitting low in the chassis and having a low center of gravity. It will also be a key reason the Levorg could change things in the BTCC. Plato thinks the new Subaru Levorg racer will be a game changer in the BTCC. Plato has had plenty of success racing and is excited about Subaru’s new entry. He goes on to say, “I’m more excited about this project than anything else I’ve done in my career. I’m sure there’ll be challenges along the way, things we haven’t thought of, because no-one’s run this layout before.”

A new driver comes on board

Team BMR gets a new driver. The team will comprise four drivers now as former British Formula Ford Champion, James Cole, will join teammates Colin Turkington, Jason Plato and Team Principal Warren Scott. James will be behind the wheel of the fourth new Subaru Levorg sports tourer in what will be his fourth season in the BTCC.

The team is getting the new rear-drive Subaru Levorgs built and ready. They will be revealed at the official BTCC season launch to be held at Donington Park on Tuesday March 22. A new chapter in Subaru motorsports is about to be written that won’t include the WRX STI. It will be different, but looks to be an exciting chapter. Stay tuned.

Tesla Contemplates A New Strategy for China Retail even As Sales Boom
Jay Leno on Elon Musk & EVs: “I Think He Should Get ... Credit"
END_OF_DOCUMENT_TOKEN_TO_BE_REPLACED