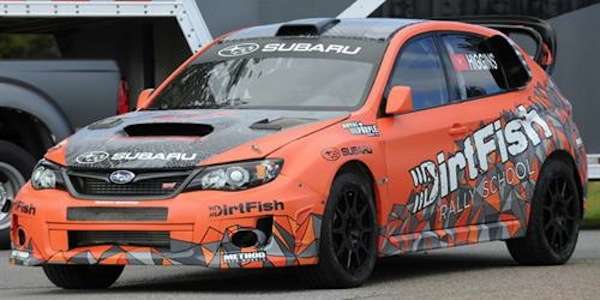 David Higgins who drives a 2014 WRX STI for Subaru Rally Team USA (SRT), will return to the Red Bull Global Rallycross action on September 26-27 in Seattle. Higgins will be driving a Vermont SportsCar prepped 2014 Subaru WRX STI. DirtFish and SRT USA revealed the livery for the #715 car that Higgins will pilot on Friday and Saturday. Higgins will drive a DirtFish Rally School-sponsored Subaru WRX STI at Red Bull Global Rallycross Seattle, which will be held at DirtFish’s Snoqualmie, WA campus.

The special orange livery on the Subaru WRX STI represents the first time that DirtFish has served as the primary sponsor of a Red Bull GRC driver. The brand has had a multi-year relationship with two of Higgins’ teammates on Subaru Rally Team USA, Travis Pastrana and Bucky Lasek. Higgins will join Subaru’s Lasek and Isachsen at the Red Bull Global Rallycross at the series’ Seattle round, held at DirtFish Rally School in Snoqualmie.

Higgins last competed in GRC in 2012

Higgins isn’t new to Global Rallycross and has worked extensively as a test driver for SRT USA and has accumulated extensive miles behind the wheel of the team’s WRX STI GRC cars. Higgins last competed in GRC in 2012. Higgins made four appearances at Red Bull GRC-sanctioned events, including X Games appearances in 2011 and 2012. He took two podium finishes, including a bronze medal in head-to-head competition at X Games in 2011, and was a runner-up finish in Colorado in his series debut.

Higgins is itching to get back

You can tell Higgins is excited to be returning to GRC and it sounds like he’s been itching to get back to the wild action. Higgins said, “This is something I have been waiting to do for such a long time. I’m very grateful to Dirtfish Rally School for the support to make this happen for me. I have four years of frustration to get out of the system after doing many miles testing these amazing cars and helping out on events with the team. I now can finally show up with my helmet and race!”

GRC on NBC this Sunday

Aside from Global Rallycross, Higgins wrapped up his fourth consecutive Rally America championship and sixth career title in the series earlier this year. This weekend Higgins will be driving a new Subaru WRX STI with the first-ever special DirtFish livery. SRT USA has a very short turn-around from last weekend’s double-header in LA. It could be an advantage for the Subaru team with Higgins driving the fresh DirtFish Subaru WRX STI. Stay tuned for GRC race coverage here at Torque News.

Red Bull Global Rallycross Seattle will be broadcast on Sunday, September 28 at 4:30PM ET on NBC.

Other Subaru WRX STI GRC stories of interest.
Why isn’t David Higgins returning to GRC in the new 2015 WRX STI?