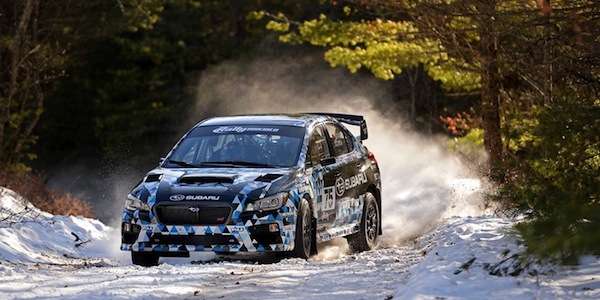 Rally fans have been wondering why the 2015 Subaru WRX STI rally car never made an appearance during the 2014 Rally America Championship season. David Higgins and Subaru Rally Team USA won the Rally America Championship title in the 2014 STI. The previous generation car performed well and Higgins and Drew claimed the championship for Subaru for the fourth season in a row. The 2015 Subaru WRX STI rally car has been seen testing and is now ready for action starting today at Sno*Drift Rally near Atlanta, MI.

The new 2015 Subaru WRX STI rally car has been in the shop of Vermont SportsCar for a year now. Subaru says the new generation STI has spent the last year in development of the new chassis. According to SRT USA, the chassis is significantly better than the outgoing model that has performed so well. Lance Smith, team owner, said, “We spent nearly a year in development of the new chassis, and the results are very promising. The 2015 STI is showing better performance out of the gate compared to our last generation of rally car.”

David Higgins and Crag Drew have been testing the new STI rally car somewhere in rural Maine getting ready for the first race of the season at Sno*Drift Rally this weekend. They drove the two versions back-to-back just to see how improved the new STI was. Higgins said, “You can certainly notice the difference in chassis rigidity with the latest version of the STI. We tested back-to-back against our 2014 car and found it has better grip and handling, so we’re confident we’ll be faster with the new car.”

Last week Subaru teased images of the new 2015 WRX STI rally car in special camouflage graphics used during their first test session. SRT USA says they will keep some of the camo graphics on the new STI for the first race at the Sno*Drift Rally. Rob Weir, Subaru Motorsports Marketing Manager, says, “What was supposed to be a special camouflage livery for testing purposes only became a hit with our fans, so we’ve decided keep it on the car for Sno*Drift and have some fun with it.”

Subaru plans to debut the full Subaru Rally Team USA factory livery on the 2015 STI at Rally in the 100 Acre Wood February 27-28. Starting today, Higgins and Drew will defend their Rally America Championship title at Sno*Drift Rally which is held on over one hundred miles of snow and ice covered roads near Atlanta, MI. Higgins will be piloting the all-new Open Class-trim 2015 Subaru WRX STI rally car. Stay tuned.

Panasonic Updates Profit Forecast, Noting How Much Tesla Batteries Help The Jump
2022 Porsche 911 GT3 Laps Nurburgring in 7:04 With Journalist Behind The Wheel
END_OF_DOCUMENT_TOKEN_TO_BE_REPLACED