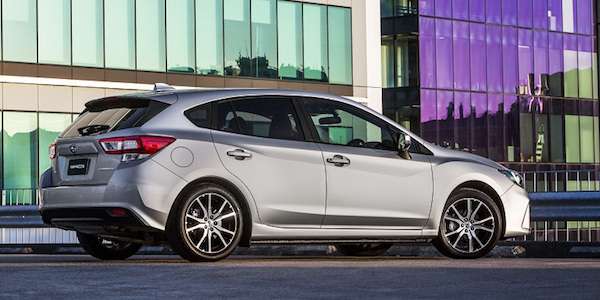 The 2017 Subaru Impreza gets tops marks from IIHS. Is the all-new compact now the safest small car in America?
Advertisement

The all-new 2017 Subaru Impreza compact is now the highest rated compact car for safety in America. Impreza has just received the highest safety rating from the Insurance Institute for Highway Safety (IIHS). The new Impreza sedan and 5-Door models are the only small cars to earn top ratings in all IIHS safety evaluations.

Safety is a core value, and a top priority for the Subaru brand, and the all-new Impreza gets the new Global Platform that the Japanese automaker said would improve safety in the new compact and they were right. The Impreza’s crashworthiness evaluations of front small overlap, front moderate overlap, side impact, roof crush, and rear impact as well as front crash tests prove it really is the safest compact car they've ever built.

Both the Sedan and 5-Door versions of the Subaru 2017 Impreza received the 2017 TOP SAFETY PICK award by achieving the highest possible rating of “Good” in all tests, and a Superior” rating in the Institute’s front crash prevention testing when equipped with the brand's EyeSight driver assist system.

The plus is added for winners that also have “Acceptable” or “Good” for the vehicle’s headlights. Impreza also received the TOP SAFETY PICK+ award, with EyeSight and LED Steering Responsive Headlights receiving the highest “Good” rating. In addition, the Subaru compact earned the top rating of “Good+” for ease of use of LATCH hardware for installing child restraints. This makes Impreza sedan and 5- Door models the only small car in America to earn top ratings in all IIHS evaluations as of February 2017.

The new 2017 Subaru Impreza is not only the safest small car in America, it's also high on the fun-to-drive meter. The body and chassis is now 70-100 percent more rigid which translates to improved steering response, and the increased rigidity of the suspension mounting reduces body roll by 50 percent compared to 2016 models. Impreza also has a lower center of gravity improving driving dynamics in the corners producing a more dynamic ride.

If you want the safest compact car in America that's also fun-to-drive, the new 2017 Subaru Impreza sedan and 5-Door earn the highest safety rating from the Insurance Institute for Highway Safety. It’s the only small car in America to earn top ratings in all IIHS evaluations as of February 2017.