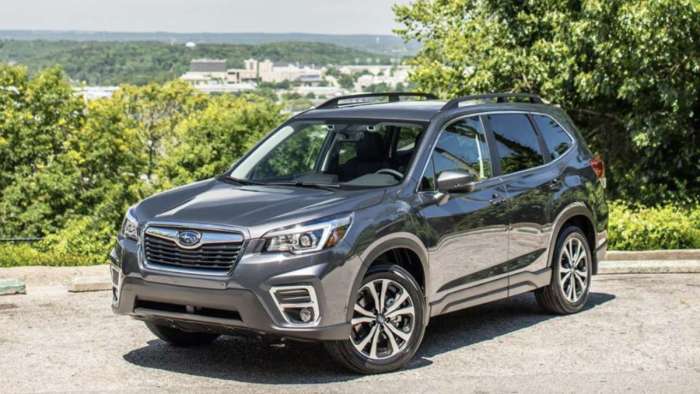 The 2021 Subaru Forester is a smart choice that will make their owners happy. See why owners say they would repurchase the compact SUV.
Advertisement

Is the 2021 Subaru Forester a compact SUV you should put on your shopping list? AutoPacific announced the 2020 Vehicle Satisfaction Award winners, and according to the results, the Subaru Forester is ranked highest, along with the Nissan Rogue, in the Mid-Size Crossover SUV category.

The automotive research website surveyed over 73,000 new car and light truck owners measuring owner satisfaction. The check 27 individual attributes, ranging from driving performance to seating comfort and interior design. New Subaru Forester owners say they would purchase the mid-size SUV again if they had to do it over again.

What do owners say about the Forester?

The Forester earned the top satisfaction score for driver's seat visibility, thanks to its "superbly tall and upright windows, low belt-line, and minimal blind-spots found at all corners." The SUV also received high marks for passenger roominess with "notable praise" for its easy cargo access and capacity.

AutoPacific says, "Subaru's Forester seems to keep getting better and better, year after year. It's become an icon and go-to mid-size crossover for those who enjoy recreating in the great outdoors. With the Forester, Subaru has captured the continual support of owners who give high marks of satisfaction for brand reputation and overall durability/quality/reliability."

Subaru Forester scores number one in another vehicle satisfaction survey

In July, Torque News reported the newly-redesigned Subaru Forester was one of four compact SUVs under $30,000 that most satisfied their owners in a new Consumer Reports annual auto survey of owners.

The Subaru Forester (2021 models start at $25,845) scored a 5 out of 5 ratings in predicted owner satisfaction. In the owners' survey, the compact SUV "delivered a combination of a roomy interior, excellent visibility, commendable fuel economy, simple controls, a comfortable ride, and responsive handling." In the road test, it received a 90 out of a possible 100 points.

Forester is the best-selling Subaru model

John W Salamy wrote on September 25, 2020 - 9:25pm Permalink
We are on our 4th Forester, my spouse likes them. I have had an issue with the interior cabin noise. It is loud, vary loud, maybe that's why the owner satisfaction is so high, they don't have to listen to their spouse. Why doesn't TN measure cabin noise levels?