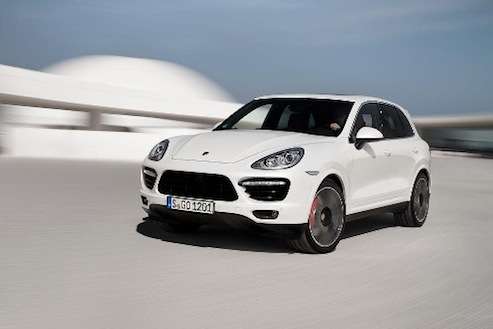 The highly anticipated Cayenne Turbo S will be unveiled at the 2014 Detroit Auto Show and is at the very top of Porsche’s performance SUV model range.
Advertisement

At the Detroit Auto Show, which starts Monday, Porsche is unveiling the Cayenne Turbo S and it will be a highlight for the brand at this year’s event. The Porsche Cayenne is the brands model that is most in demand around the world and the all-new Cayenne Turbo S will sit at the top of the performance SUV model range. Porsche sold 74,763 Cayenne’s around the globe last year which was a 24.8 percent increase over sales in 2011.

Performance SUV’s are in demand in the U.S. and buyers around the globe bought close to 19,000 units of the Cayenne S, Cayenne GTS and Cayenne Turbo. Porsche is certainly the leading manufacturer of high-performance SUVs and is expecting the new Cayenne Turbo S to lead the way in 2013. The U.S. is Porsche’s most successful market around the world with a total of 35,043 Porsche vehicles sold which is a 20.7 percent increase over 2011. The new Cayenne Turbo S should also be a in demand with its high level of performance.

The Cayenne Turbo S is a “Higher Authority”

Porsche calls the new Cayenne Turbo S a “Higher Authority” because of its power increase over the Cayenne Turbo model. Porsche engineers wanted to build a Porsche Cayenne SUV that would surpass any previous level of performance. The new four-door Performance SUV is the most powerful crossover to ever wear the Porsche Crest and is certainly impressive.

Like a finely conditioned athlete, the Porsche Cayenne Turbo S has the muscle to deliver exceptional performance when its needed. Porsche calls the new Turbo S a “powerful athlete,” and it starts with the twin-turbo V8 that uses the latest direct fuel injection (DFI) technology. It features a VarioCam and charge air cooling to help generate all that power. The powerful V8 has a 10.5:1 compression ratio that also helps increase power when coupled with all that torque. Most of the torque curve is available between 2,250 and 4,500 rpm giving it a powerful launch off the line.

As with most performance automakers, the new Cayenne Turbo S uses lightweight construction and even while delivering all that power, it still delivers relatively low fuel consumption. The Cayenne Turbo S is expected to get 15/22 mpg city/highway and 17 mpg combined fuel mileage which is the same as the Cayenne Turbo model.

The Cayenne Turbo S V8 will be coupled to a Tiptronic S automatic transmission and will feature all-wheel-drive to transfer power and keep all four wheels firmly planted on the pavement. While most global buyers won’t ever take their new Turbo S off-road, the new model will feature extensive off-road capability. It will feature an air suspension system with self-leveling and ride-height control that will keep a constant ground clearance depending on the conditions and driving performance needed.

The Porsche brand is coming off their most successful year ever, and the Cayenne is their top selling model. Look for the all-new high-performance Porsche Cayenne Turbo S to be unveiled today in Detroit, and we’ll watch as it will likely be a big hit with buyers in the global market.