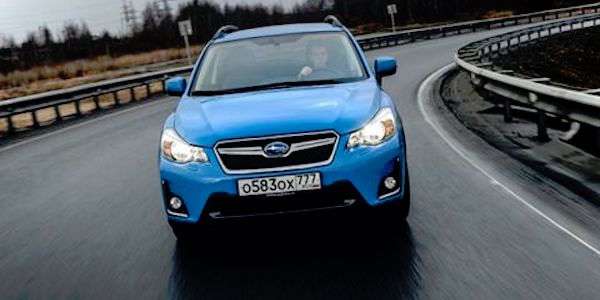 Subaru likes to repackage existing models and then market them as a new edition in other global markets. That’s what they’ve done with the “new” Hyper Edition XV (Crosstrek in US). This Subaru crossover was introduced in the North American market as the “Hyper Blue” model when they dropped XV (which stands for Crossover Vehicle) from the name for the 2016 model year, and just went with Crosstrek. It was a way of setting the compact crossover apart for North America, Subaru’s largest market.

Now Subaru Motors, the official distributor of Subaru vehicles in Russia and Belarus, will start selling the limited edition version of the all-wheel drive XV Hyper Edition crossover. It gets the similar Hyper Blue exterior paint and interior upgrades as its U.S. counterpart. It’s the same Hyper Blue exterior color as the US-spec 2016 WRX STI and BRZ Hyper.Blue models.

Outside, the Russian Hyper Edition XV gets the unique exterior blue color, and special badging on the rear hatch. Inside, it comes with its own unique badging and serial number as Subaru Russia will only get 150 examples of the special edition model.

The Hyper Edition XV is powered by the 2.0-liter boxer gasoline engine and mated to a continuously variable transmission (CVT) Lineartronic automatic that drives the Symmetrical all-wheel-drive system. XV is a popular model in Russia due to its extra ground clearance (220 mm), which helps consumers power through the deep snow. The crossover comes with additional under-cladding for protection against mechanical damage, which is particularly appealing to those who lead an active lifestyle.

Subaru only sells four models in Russia, Outback, Forester, XV and WRX STI, and the XV is a popular vehicle. It’s new to Russia, and now the rebadged US-spec 2017 Subaru Crosstrek Hyper Blue, will be in Russian showrooms starting in May 2017.