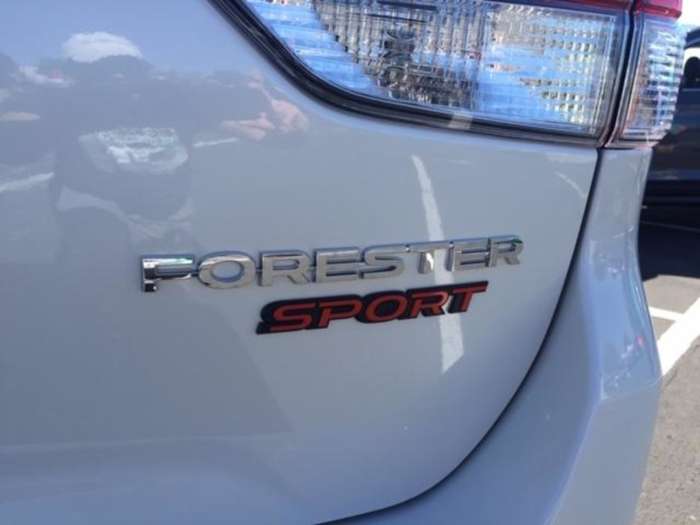 The first year of the fifth-generation Forester introduced for 2019, gets a number of important improvements. It also has a few things we don’t like.
Advertisement

This week we drive the completely redesigned 2019 Subaru Forester in Sport trim. There are five things we liked on the all-new Forester and four things we didn't like.

The Subaru Forester has been completely redesigned for the 2019 model year and is now in its fifth-generation. It gets the new Subaru Global Platform growing 1.2-inches in its wheelbase giving it improved ride quality, a roomier cabin with 1.4 more inches of rear legroom, and superior safety tech. Forester also comes with a wider tailgate opening, more cargo room, standard EyeSight driver-assist technology and Starlink infotainment package, including Apple CarPlay and Android Auto compatibility. Forester also gets a newly-redesigned 2.5-liter engine with improved fuel mileage.

What we don’t like: There is no heated steering wheel in the all-weather package. It’s surprising Subaru doesn’t include this in the package. They keep your seat warm, but your hands freeze.

Stepping inside the new Forester cabin reveals an even greater sense of space and openness with interior volume growing. You get 41.2 inches of headroom in front and 39.6 in the rear seats, while legroom is 43.3 inches and 39.4 inches, respectively. The Sport is attractive with its dark gray sport fabric, leather shifter, and orange stitching and trim on the seats, dash, console and steering wheel.

Forester gets a redesigned dashboard, with a new touchscreen infotainment interface and, for the first time in a Forester, Apple CarPlay and Android Auto integration. The infotainment, climate controls, and steering wheel controls are all to use and understand. The interior design gets more of a refresh than a total makeover. 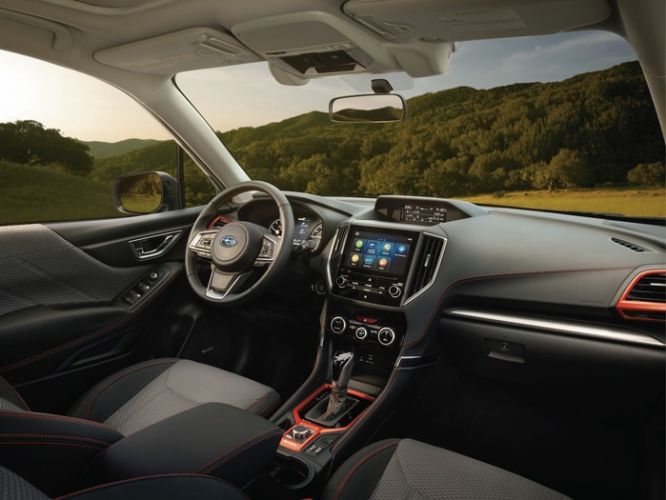 The Forester's cargo carrying ability and flexibility is one of the small SUVs strong points. It is one of the largest in the segment, with 35.4 cubic feet of space behind the rear seat. This increases to 76.1 cubes with the seats folded nearly flat. The sunroof in the Sport decreases both figures by a few cubic feet. There are numerous bins, trays, and pockets for storage throughout the cabin.

What we liked: We especially liked the optional power rear liftgate with auto close and height memory function. It’s also easier to load cargo in the new Forester because of the wider rear opening (+5.3 inches over the outgoing model).

What we don’t like: There is no courtesy lighting inside. We had to get into the Forester tester in the black of night and had to hunt for the interior dome light above the dash. It took a few minutes to get everything illuminated so we could see.

Each Forester trim is powered by a 2.5-liter four-cylinder Boxer engine with direct injection producing 182 horsepower and 176 pound-feet of torque (up from 170 hp and 174 lb-ft in the previous-generation Forester). It comes mated to a continuously variable automatic transmission (CVT) with a 7-speed manual mode and steering wheel-mounted paddle shifters. Forester Sport also comes with a version of the Subaru WRX STI Intelligent Drive (SI-DRIVE) with Intelligent and Sport Sharp modes as upgrades. Drivers will be able to choose from two selectable modes; Intelligent and Sport Sharp.

It also comes with an Auto Start-Stop function, which shuts off the engine when the vehicle is at a standstill and switches it back on as needed to save on fuel but can be a bit annoying in stop-and-go traffic. All Forester models come standard with Subaru’s Symmetrical all-wheel drive and 8.7-inches of ground clearance.

What we don’t like: The 2.0-liter turbocharged engine has been discontinued. It offered 250 horsepower and sportier driving dynamics. We will miss this sporty model. The 6-speed manual gearbox has also been discontinued for 2019.

After we got underway in the Forester Sport we could immediately feel the difference in ride quality and driving dynamics over the previous generation model. The new 2019 Forester feels more composed when going around sharp mountain curves near Evergreen than the previous model, and on the open road, the small SUV soaks up the bumps and is quieter inside.

Power had been improved over the outgoing model and acceleration feels adequate when you're driving around town. We drove up I-70 into the mountains at elevation, and while most reviews lament the lack of power, we think it has enough for most driving situations. If you are loaded with cargo and four adults, it might feel like you need more power.

Forester is comfortable up front for longer trips and won’t leave you feeling tired after a long commute. Rear seat passengers will have to deal with flatter seat cushions and an upright seating position.

What we like: All-around visibility in the new Forester is excellent, thanks to narrow roof pillars and large windows. It has the most open greenhouse feeling of any small SUV. It’s great for commuting in heavy traffic offering exceptional outward views from the driver’s seat.

What we don’t like: Handling isn't as responsive as the previous generation Forester. For driving enthusiasts, the Forester gets a little tamer as Subaru appeals to a wider audience. Most consumers will appreciate the new, more comfortable ride quality. For those wanting a ride higher on the fun-to-drive meter, you will have to opt for the Subaru WRX. Although if you opt for Forester Sport it comes with a version of the Subaru WRX STI Intelligent Drive (SI-DRIVE) with Intelligent and Sport Sharp modes as upgrades. We were able to dial up Sport Sharp mode which improved driving dynamics.

What we like: Adventure enthusiasts will want to opt for the Sport trim. The new fifth-generation Subaru Forester Sport gets a two-mode X-Mode system that features separate settings for snow and dirt as well as deep snow and mud, and the unique SI-Drive Sport system for improved throttle response. The system should offer even more off-road capability to go virtually anywhere necessary. Forester also comes with a minimum ground clearance of 8.7 inches, along with the widest possible approach and departure angles and ramp break-over angle for extreme off-road use. The new 2019 Forester offers increased ground clearance for a wider range of off-road activities than ever before.

Subaru’s Forester has the distinction of being the longest-running Insurance Institute for Highway Safety (IIHS) Top Safety Pick (TSP) winner in the small SUV class for 12 consecutive years (2007-2018), and the Japanese automaker is looking to extend that streak with the all-new 2019 Forester. When equipped with EyeSight, (standard for 2019), the 2018 Subaru Forester earned the 2018 TOP SAFETY PICK award from the Insurance Institute for Highway Safety (IIHS)

Look for the new 2019 Subaru Forester to get even better scores once it’s tested by the IIHS later this year. According to the Repairer Driven News, Subaru built 56 percent of the next-generation 2019 Forester body out of high-strength steels which integrates the latest version of the Subaru ring-shaped reinforcement frame design.

What we like: The Forester now comes with standard EySight driver assist safety system. This will help consumers avoid many accidents caused by distraction. EyeSight has been proven to reduce accidents.

The 2019 Subaru Forester Sport trim could be the best value proposition among all the models. It comes standard with the All-Weather package, which is a must for those living in cold-weather climates and comes with additional drive modes and a two-mode X-Mode system that enhance the Forester's off-road capabilities. It is also the least expensive trim available with a blind-spot monitor. Forester is a good choice and is more fuel-efficient than most of its front-drive competitors.

Mr. White wrote on November 4, 2018 - 10:43pm Permalink
Open differentials front and rear. Why? I'd gladly trade all the nanny naggers for a pair of Torsens. (Hey Subaru, the car wouldn't need a backup camera if it was as small and had as good a visibility as the original '99 Forester.)
Zach H wrote on November 4, 2018 - 11:51pm Permalink
There is interior lighting, it just has to be set to auto come on when the doors are open. That saves you from the hunt. Every dome light in the vehicle, (there are 3) has its own switch it auto illuminate when approaching the vehicle (proximity key models), or when the door is opened, standard key models.
Ed B wrote on November 5, 2018 - 10:12am Permalink
Good summary of the new Forester overall. I'm a Subie fan and owner (2017 XT) and Subaru just really dropped the ball for enthusiasts. The 'sport" monikar on the 2019 version is really a joke. Subaru missed an opportunity in my opinon. When the XT was out, there were very few CUVs that riveled its' power, utility and safety. Now, they've fallen back into the pack with this mainstream offering. Oh well, it is what it is - but they really missed an opporunity to be the market leader for performance CUVs.
Robert W Kirkman wrote on November 6, 2018 - 11:59am Permalink
Rear seats do recline a few inches by pulling a strap.
Henry wrote on November 7, 2018 - 4:28pm Permalink
"Rear seat passengers will have to deal with flatter seat cushions and an upright seating position." I've watched video showing that the rear seatbacks recline. Is this feature not present in the Sport trim?
Ayal Zingher wrote on January 20, 2021 - 3:10pm Permalink
In the basic and premium models, without power on the rear gate, it is a pain to open in cold weather. This is a design flaw. It does not stay up when half open and you need to grab the bottom to fully open it. I complained to the dealer. We went to the shop and checked other cars.