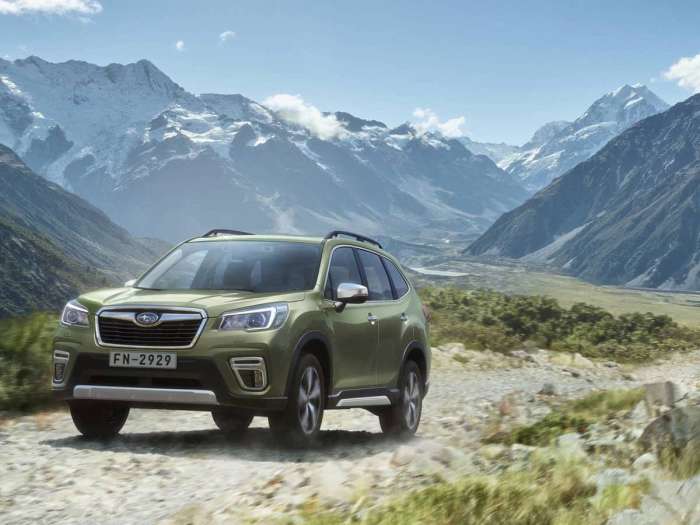 The all-new 2019 Subaru Forester grows bigger in size, gets more power, and it gets better fuel mileage. See how it compares with the competition's mpg.
Advertisement

When new-generation vehicles are revealed they usually grow in size making it harder for automakers to increase fuel mileage. The all-new 2019 Subaru Forester wheelbase grows bigger (1.2 inches) and the interior of the new SUV also grows with rear legroom increasing 1.4 inches as well as adding more headroom, shoulder, and hip room, and cargo space gets a bump to 76.1 cubic feet. How does Forester do with increasing fuel mileage?

All new fifth-generation Foresters get the newly-upgraded 2.5-liter boxer engine. The new power plant comes with direct injection, higher compression, along with the active valve control system (AVCS) on the exhaust side. The new engine gets an increase in power too and now produces 182 hp and 176 lb-ft of torque, versus 170 hp and 174 lb-ft in the previous-generation Forester.

READ: Subaru’s Forester Strategy; Will Loyal Customers Buy Into It?

Even with more power, Forester gets more fuel efficient for the 2019 model year. EPA estimates crept up to 26/33 city/highway mpg, and 29 combined mpg, vs 26/32/28 for the outgoing model, giving the 2019 Forester a one mpg improvement highway and combined.

How does the new Forester compare with the competition with all-wheel-drive in the small SUV class? Forester ties for the top spot with the Honda CR-V w/AWD getting 27/33 city/highway mpg and 29 combined with the 1.5-liter turbo model. Here’s a list of the other small SUVs with AWD including the Toyota RAV4 Hybrid model.

The all-new 2019 Subaru Forester is powered by the 2.5-liter Subaru Boxer engine, and it comes standard with all-wheel-drive which is a core value for the Japanese automaker. Subaru has also announced a new 2019 Forester “e-Boxer” hybrid with a 2.0-liter turbo for the Japan market that should get better fuel mileage than the standard model. It’s unsure if Subaru Corp will sell it in North America. Stay tuned.