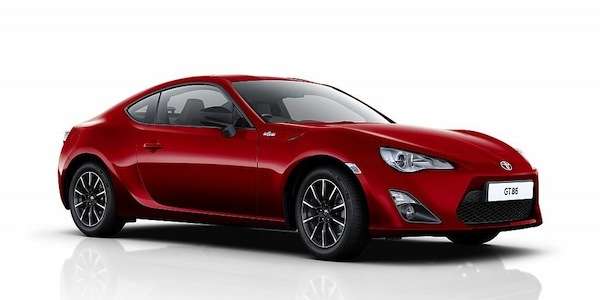 Toyota released information on the new 2016 Toyota GT86 and says a new special edition model will be released this summer.
Advertisement

For, 2016 The Toyota GT86 gets a refresh for the lineup with styling and detail changes. It also gets price reduction in European markets which makes the two-door coupe an even better value for driving enthusiasts. Toyota also says it will launch a new special edition model sometime this summer.

2016 GT86 sports coupe comes with new wheels and new colors. The top of the lineup Aero model gets gloss black 18-inch alloy wheels and is now available with a new GT86 Orange exterior paint. Aero is now exclusively available with a six-speed manual gearbox. The 18-inch rims are also newly available as an option on the base 2016 GT86 model.

The price gets lowered by 300 British Pounds for the base Primo model which rides on 16-inch alloy wheels. An on-going customer offer is available, adding a further 505 British Pound saving to deliver an on-the-road price of 22,195. Pricing for other models in the range is unchanged.

Toyota was supposed to begin delivery of the 2015 Toyota GT86 CS-R3 rally car this month, but it will now be delayed until October 2015. Unforeseen technical issues will keep the sports coupe in the garage until...read more.

Like the 2016 Subaru BRZ and Scion FR-S U.S. counterparts, the 2016 Toyota GT86 will still be powered by the Subaru 2.0-liter naturally aspirated boxer engine producing 200 horsepower. Toyota says the engine now complies with Euro 6 emissions standards, with no change to its fuel economy and CO2 performance.

Look for a new special edition model to join the range this summer, details to be announced soon. The 2016 Toyota GT86 is available to order now with first deliveries to customers in mid-July.

James wrote on June 11, 2015 - 12:30pm Permalink
Toyota need to cut the GT 86 UK prices for ALL models (including the auto) by about £3k. Otherwise it will pass into history as a great car that few people bought. Especially with the MX5 mk4 on the way.