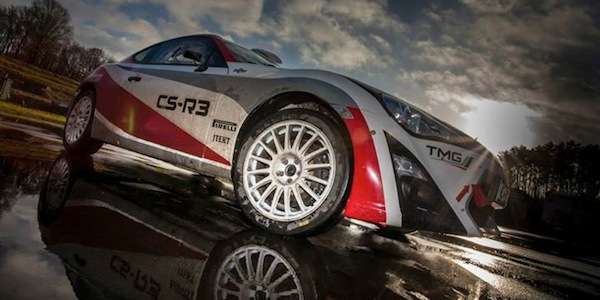 The 2015 Toyota GT86 CS-R3 rally car has been delayed again. What is keeping the rear drive rally car from being delivered on time now?
Advertisement

Toyota was supposed to begin delivery of the 2015 Toyota GT86 CS-R3 rally car this month, but it will now be delayed until October 2015. Unforeseen technical issues will keep the sports coupe in the garage until later this year. According to Toyota Motorsport GmbH (TMG) it’s the power steering unit that is causing the delay in the launch of the GT86 CS-R3.

Back in January, we reported that the rally car was supposed to ready for its debut in the first quarter of 2015, but TMG said they ran into a few challenges to get the kit for the sports coupe ready for customers. The regulations that need to be met for WRC are written for front-drive cars and the GT86 sports coupe is of course rear-drive. Now there is another delay because of TMG not being able to find a suitable power steering unit for the CS-R3 rally car.

Power steering unit must be “off the shelf”

This is also due to being able to meet FIA R3 regulations that requires the power steering unit to be an “off-the-shelf product.” This will require TMG to do another testing cycle to ensure the final product meets TMG’s standards. The 2015 Toyota GT86 CS-R3 rally car will not be ready for the 2015 rally season and buyers will have to wait for the 2016 season to race the new rear drive sports coupe. TMG says they will offer refunds and free entries to the 2016 Trophy for all participants who are already registered for the 2015 edition.

TMG released pricing on the rally-ready sports coupe and it won’t be cheap. Because of the launch delay, TMG says they will extend its introductory discount. The CS-R3 kit, in either tarmac or gravel specification, costs...read more.

Nico Ehlert, Principal Engineer Customer Motorsport said, “It is extremely frustrating that we must wait until next season to see customers competing with the CS-R3. The car is running very well in testing and we have received positive feedback from everyone who has driven it, from our professional test drivers to the potential customers attending our events. So it’s particularly disappointing that one component has had such a significant effect, but we’ve tried everything to keep to our schedule and unfortunately it was just not possible. We have a solution in place and I am sure the final result will be very positive.”

Rally enthusiasts will have to wait another season to race the Toyota GT86 CS-R3 Rally Car. The new rear drive sports coupe will now be ready for launch in October 2015 in global markets where the Toyota GT86 is sold. Stay tuned.