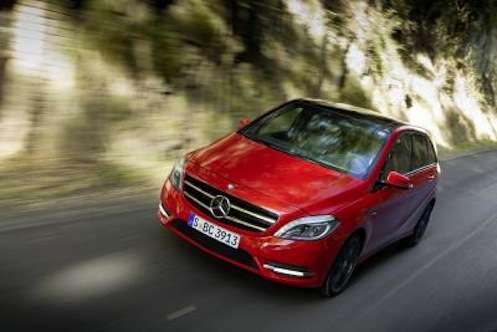 Mercedes-Benz will be bringing an all-new compact SUV to production that will be built alongside the new A-Class.
Advertisement

Mercedes-Benz has announced that an all-new compact SUV will begin production at their Rastatt Germany plant. The new compact crossover will be built alongside the B-Class and the new A-Class that rolled the first car off the assembly line yesterday that we reported here yesterday. The new SUV will share the same architecture as the new A-Class and B-Class models that are being first introduced in Europe, and will be launched here in the U.S. as the new CLA four-door coupe sometime next year.

The press release says the new compact SUV will be “sporty and emotive,” which could mean the new crossover will offer new competition for the BMW X1, Audi A3 and the Range Rover Evoque. Although Mercedes has not released specific information, the new compact SUV would likely be called the GLA. If we know how Mercedes thinks, the compact crosser will probably be sportier than the average compact SUV.

The range of engine choices will most likely be the same as the current A-Class. Reports say the European engine offerings will include three gasoline four-cylinder powerplants with displacements ranging from 1.6 to 2.0 liters and will all feature the latest direct-injection and will be turbocharged. Horsepower ratings will be around 155 on the smaller 1.6-liter, and 211 on the 2.0-liter mill.

The European models will likely get three turbocharged four-cylinder diesel choices: the A180 CDI, rated at 109 horsepower and 184 lb-ft of torque; the A200 CDI, with 136 horsepower and 221 lb-ft; and the A220, rated at 170 horsepower and 258 lb-ft. Both gas and diesel engines will be coupled to a choice of a six-speed manual or seven-speed dual-clutch automatic transmission.

The latest safety and technology

Like the all-new A-Class, the new compact SUV will come loaded with the latest safety and technology. The A-Class comes standard with the radar-supported Collision Prevention Assist system, Attention Assist, brake hold function, Hill-start Assist, and the brand's Pre-Safe system, which prepares the vehicle for an impending crash. Optional safety features include Distronic Plus and Adaptive Highbeam Assist.

Mercedes has not announced if the new compact SUV will be offered in the U.S., but it will most likely be launched here along with the new A-Class sometime in 2014. We would expect the new SUV to be offered with the 2.0-liter gasoline turbocharged engine which produces 211 horsepower as the base engine. It will be interesting to see if Mercedes will decide to offer one of the diesel powerlants like BMW has just announced possibly coming in the new 5-Series and X3. If pricing on the new Mercedes-Benz compact SUV is similar to the new A-Class model, it could be a huge hit here the U.S.