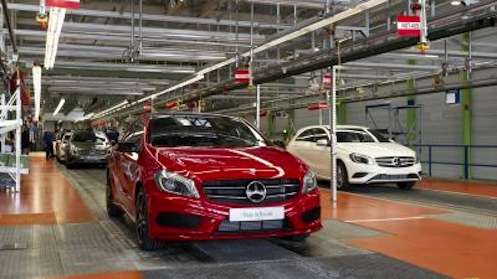 The first 2013 Mercedes-Benz A-Class rolled off the assembly line today in Rastatt, Germany with a surprisingly low base price.
Advertisement

Mercedes-Benz announced that the very first A-Class compact model rolled off the production line today. This is the company’s second new compact model following production of the new B-Class last year. Both cars are produced at the company’s Rastatt, Germany plant and share a common architecture allowing the cars to be produced on the same assembly line. The Mercedes-Benz A-Class represents a new entry into the growing luxury compact segment along with the BMW 1-Series and the Audi A3.

The new luxury compact from Mercedes made its production debut at the 2012 Geneva Motor Show and was a big hit with consumers. The automaker's goal here in the U.S. is to hook a new, younger set of Mercedes-Benz loyalists with the all-new A-Class. And while we won’t see the new luxury compact here until sometime in 2014, the car is already a huge hit in Europe.

A-Class is loaded with safety and high-tech features

Mercedes reports that since the start of sales in mid-June in Europe, more than 40.000 customers have already ordered the new A-Class before the first car was produced. "Demand for our premium compact cars is so strong that we are going to to introduce a third assembly shift in October 2012", said Peter Wesp, Head of the Mercedes-Benz Rastatt plant.

When the A-Class was first introduced in Geneva, Mercedes said the compact car would be packed with safety and high-tech features normally not found on more expensive models like the S-Class. And they were right, as the A-Class comes standard with the radar-supported Collision Prevention Assist system, Attention Assist, brake hold function, Hill-start Assist, and the brand's Pre-Safe system, which prepares the vehicle for an impending crash. Optional safety features include Distronic Plus and Adaptive Highbeam Assist. The European spec A-Class will get three trim levels, Urban, Style and the AMG Sport. There has been no official word on what trim levels will be offered in the U.S.

Europeans will also get to choose from more powertrain options. There will be three four cylinder direct-injected turbocharged engines and three turbocharged four-cylinder diesels. All the engines will come with ECO start/stop technology and will be coupled to either a six-speed manual or seven-speed dual-clutch automatic. American powerplants have not been confirmed but we will likely see the gas-powered 1.8-liter turbocharged four that will produce 201 horsepower. And with the growing acceptance of diesels in the U.S., we could even see a diesel motivated A-Class.

The all-new 2013 Mercedes-Benz A-Class should be a strong contender in America’s growing luxury compact segment. Prices in Germany start from $29,340 for the A 180 BlueEfficiency. With an attractive price below $30,000 it’s no wonder sales are so strong in Europe. Pricing has not been announced for the U.S. yet. Stay tuned.

Click here to read about the all-new compact SUV from Mercedes-Benz.

Tsingshan's Threat to Tesla: EV Maker Is In Battery Crosshairs
Tesla-Funded Research Reveals One of The Biggest Mysteries of EV Battery
END_OF_DOCUMENT_TOKEN_TO_BE_REPLACED