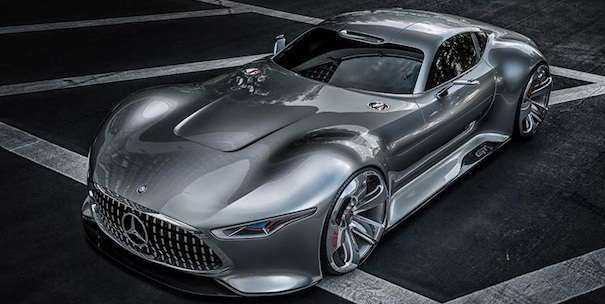 The Mercedes-Benz AMG Vision Gran Turismo has been unveiled and will arrive at the Los Angeles Auto Show this week. It’s ready for Gran Turismo 6.
Advertisement

If you want to see the future of Mercedes-Benz, all you have to do is look here and see what the German automaker has planned. Mercedes has been an innovator since 1886 when Carl Benz built the first horseless carriage. The brand continues to be one of the most innovative automakers in the world and they are influencing the future of the automobile. Why did Mercedes-AMG build this supercar?

This would be the second car that AMG has designed and built from the ground up. While other AMG models are built for the existing Mercedes-Benz stable, the SLS AMG was the first complete vehicle to be built by Mercedes-AMG. The Mercedes-AMG Vision Gran Turismo is only the second car AMG has created in their minds and brought to life.

Mercedes-Benz along with many other automakers entered into a unique partnership with Polyphony Digital Inc., creator of PlayStation’s best-selling Gran Turismo franchise. Automakers like Mercedes created concept models giving a unique insight into the future of the automotive sector. The Mercedes-AMG Vision Gran Turismo is that example that will be coming on December 6 to Gran Turismo 6.

Mercedes-AMG has not released any more information on the new supercar, but we’ll get to find out more this week when the Mercedes-AMG Vision Gran Turismo makes its global debut at the LA Auto Show 2013 on November 20. Gamers will get to drive this and many other incredible vehicles designed just for this game on December 6. See it first in LA and shortly thereafter, drive it on Sony PlayStation.

Tell us your opinion of the Mercedes-AMG Vision Gran Turismo.

Chevy Coach Coupe wrote on November 17, 2013 - 9:20pm Permalink
I've never been much of a Mercedes fan, but this car I'd buy if I could afford the million dollars + they will probably ask for it. I'd like to see the interior, but the exterior is gorgeous. The wheels might be the worst design element in the car, but not enough that I wouldn't like to own it just as it is. I guess if you have enough money and can charge enough for the resulting car, anyone can design and build a great sports super car. The real challenge is for Mercedes is to build a car like this and then sell it for $50-65,000 so people other than billionaires and movie stars can afford it. Now THAT would be something to crow about.
Parks McCants wrote on November 17, 2013 - 11:00pm Permalink
Hey Chevy Coach Coupe. I know your seeing Corvette design elements in this concept. Yeah it's cool. But I've never seen so many blind spots on one car. How would you drive it. In any case, the automotive art aspect is over the top. We'll never see one on the road.
Cande wrote on May 24, 2014 - 10:55am Permalink
Maybe my local mechanic is miosefirmnd ? he showed me how to to disable the traction/stability control system and its not the little button on the dash ,but is a procedure that I always﻿ seem forget . Perhaps there are three levels of control ? You do not seem to be informed or you present your work poorly ? In response to one of the comments regarding the torque difference , I suspect there is a correlation in the price point difference . It is my understanding the 2008 car has forged internals