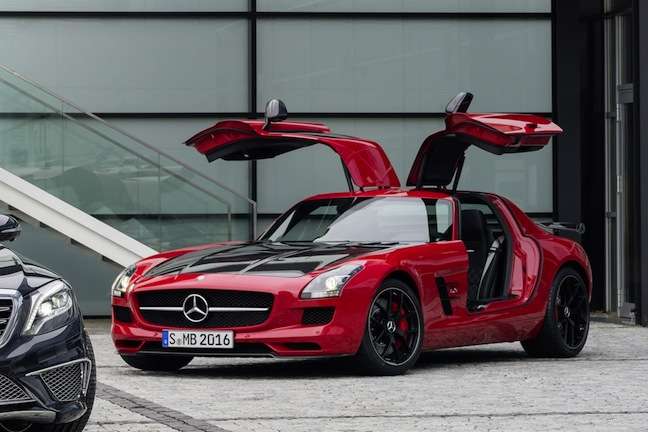 Mercedes-Benz will bring the 2015 Mercedes SLS AMG GT Final Edition and 2015 S65 AMG to the LA Auto Show. This will bring an end to an era.
Advertisement

Mercedes-Benz has been teasing an AMG vehicle on their Facebook page and it’s finally been revealed as the 2015 SLS AMG GT Final Edition. Mercedes will bring an impressive era to an end as they build the final 350 Mercedes SLS AMG GT’s in the Final Edition model. The Final Edition model will officially be revealed simultaneously at the Los Angeles Auto Show and the Tokyo Motor Show (both from 20 November to 1 December 2013).

They will also be unveiling the new S65 AMG at the two International Motor Shows shows. Tobias Moers, Chairman of the Board of Management of Mercedes-AMG GmbH says: "The two new AMG high-performance vehicles represent the spectacular next level for our exciting model array. The S 65 AMG stands for maximum exclusiveness and the unparalleled dynamism of a V12. With the SLS AMG GT Final Edition we are showing an ultimate, particularly attractive variant of our super sports car."

The super sports car will be ultra-exclusive, and the Final Edition model, built in a limited run of just 350 units, is sure to be snatched up by collectors around the globe and put away in private collections. Look for it to be a highly collectable car that will only increase in value. Mercedes has not released pricing on the exclusive Final Edition. It's reported that Mercedes is working on a new AMG model coming in the future.

While other AMG models are built for the existing Mercedes-Benz stable, the SLS AMG was the first complete vehicle to be built by Mercedes-AMG. The Final Edition model will likely feature the same AMG 6.3-liter hand-built V8 with 583 horsepower and 479 lb ft of torque to propel the super sports car.

The high-performance V-8 is mated to a seven-speed AMG SPEEDSHIFT dual-clutch transmission located on the rear axle that has been recalibrated for more direct shifts. Engineers were able to develop a new gear change logic and optimized transmission control, to shorten the shift time required during shifts. The additional horsepower, alloy paddle shifters and transmission changes give the SLS AMG GT some incredibly fast track times.

The SLS AMG GT was first presented in 2009 and has been an icon of the Mercedes-Benz brand and is highly sought-after around the world. Mercedes will bring the 2015 SLS AMG GT Final Edition model to LA and Tokyo next week, alongside the 2015 S65 AMG which you can read about here.